The Fortress of Louisbourg, Nova Scotia

Having hauled our sweet children all over Newfoundland, we were looking forward to a few days of down-time on Cape Brenton Island, Nova Scotia.  To be honest, we would have lounged around the Kluskap Ridge RV & Campground with its fantastic views and playground and entertained ourselves with bonfires and fish and chips alone, but Moe from Captain Caper's Fish and Chips confirmed what we'd long suspected... that we would be fools to not make the 60 mile drive to The Fortress of Louisbourg.

Not wanting to upset Moe, we packed up our suncreen and Nalgene water bottles and braved the 82 degree "heat wave" as we set out toward Louisbourg.

The Fortresss of Louisbourg is a one-quarter partial reconstruction of an 18th Century French fortress.  Originally settled in 1713, the Canadians got the bright idea to partially reconstruct the place in the 1960s.  The site claims to be the largest reconstruction project in North America... and is basically like a seaside Colonial Williamsburg.  It is also a dream come true for an 8 year old who loves all things old-fashioned and soldier-like. 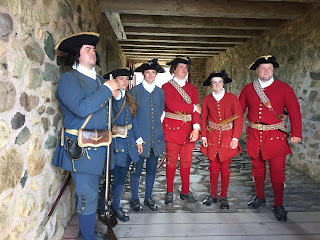 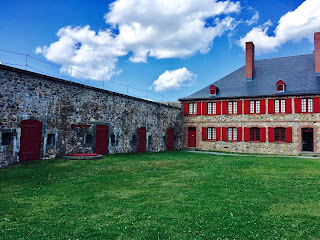 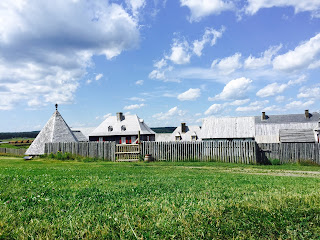 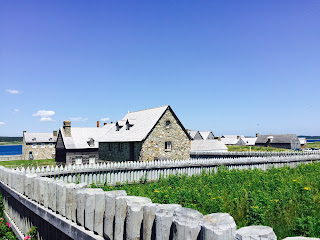 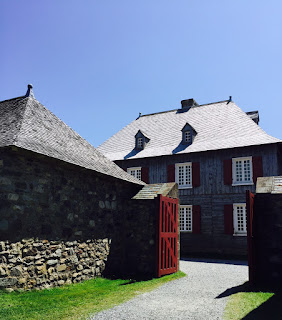 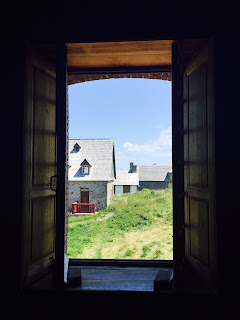 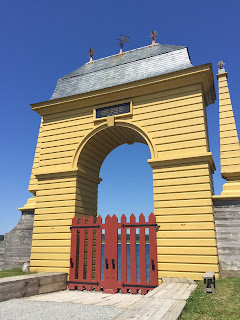 Much like Colonial Williamsburg, the employees here are basically actors, extremely dedicated to staying in character and making history come alive. We began our visit with lunch at a 3-course restaurant, featuring small samplings of everything exactly as it was made in the 18th Century, and giant bibs to boot! Pea soup, grilled fish with steamed vegetables, and spice cake.  The meal seemed like it would be a safe bet for our kids, who are fish lovers, but Andrew was alarmed at the first reading of the menu. His tummy still off from the ferry ride, he recoiled from the table as the green soup was delivered, complete with what he determined to be "slimy bread," also known as bread with butter. As the rest of us ate, he waited in the windowsill and counted the minutes until he could go play prisoner in the town square. 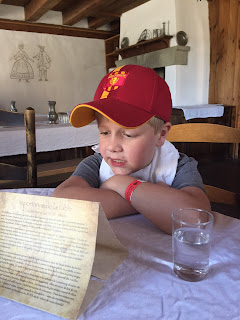 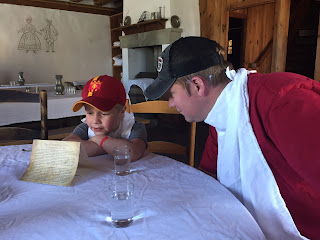 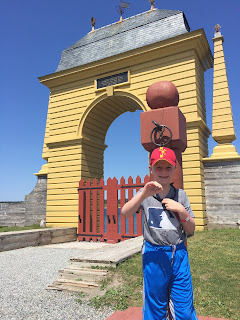 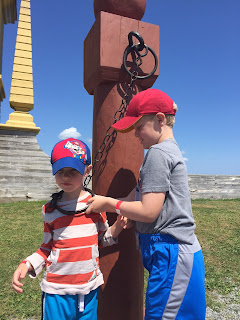 After lunch, we walked the streets and let our kids play "guard," "farmer," "innkeeper," or whatever struck them as reasonably entertaining.  Locking Mark in an outhouse was a huge hit, as was eating herbs from the gardens (which is not only allowed... but encouraged).  Max smelled like chives but was thrilled with the day.  Andrew still couldn't wait to get his hands on a fake weapon. 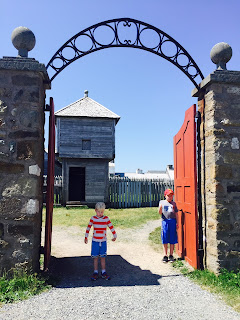 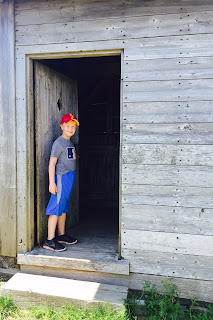 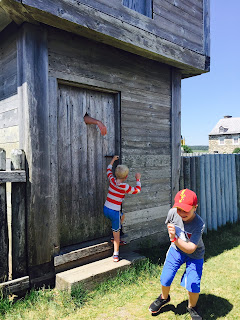 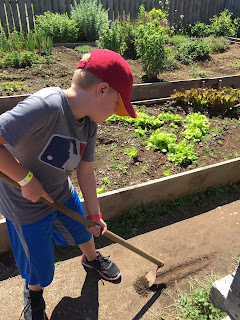 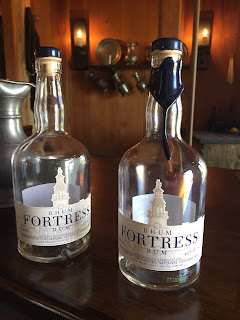 At 1pm, the Children's Rookie Tour commenced, and all of Andrew's dreams came true. The boys were given hats and a wooden rifles. They were taught to march and "fire" on command, feed the farm animals and fillet a cod.  The parents, eyeing the rum in the gift shop but unanimously agreeing that there was a real lack of suitable mixers available, took to sitting or napping on benches for 2 hours. 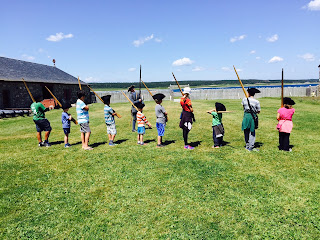 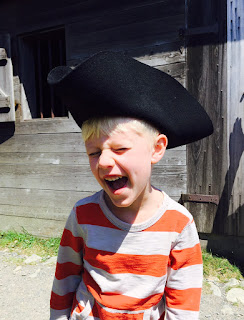 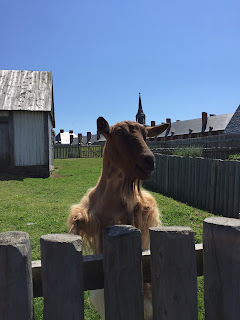 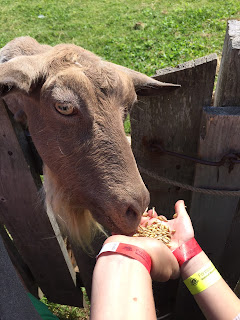 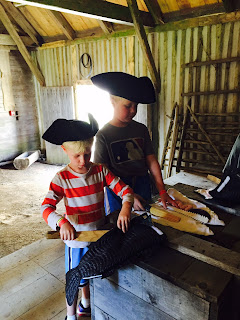 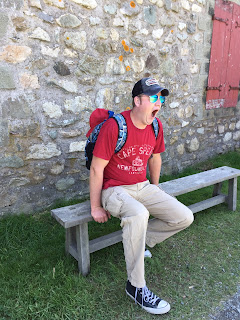 As the tour wound down, our tired, hungry, sweaty kids got a little sassy.  When April returned from the bathroom, she found Stern Mark holding a back-in-time-out (see what we did there?) against a cottage fence.  Andrew stomped and argued and tried to put up a fight, Mark wasn't having it. Max accepted his fate and tried sleeping against the spike-topped fence posts.  Cute and so obedient, his adorableness ended with a hug from Dad as we headed toward the parking lot.

Side note: April is more than certain that this precisely how things went between she and her sister when they were this age. Amy accepting her punishment and getting it over with, all while grabbing a quick nap.  April arguing and making things so much worse for herself... 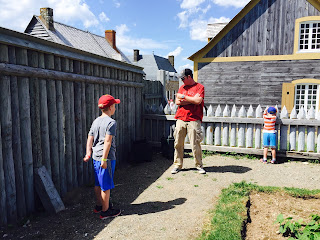 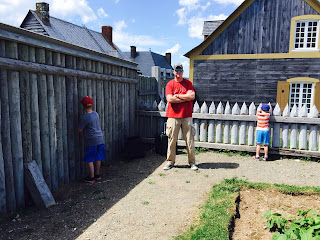 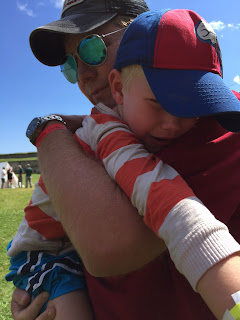 Rumors of a vicious dog that had escaped from a car and was attacking patrons in the parking lot were swirling among the staff, but we took our chances and headed toward our truck full of snacks and cozy car seats as soon as possible.  Max was asleep before we hit the highway. Mission accomplished. Tomorrow we drive The Cabot Trail! Onward!