Leaving at noon this time instead of midnight, we were excited to cross the sea in the sunshine. We envisioned ourselves enjoying a champagne lunch on the deck as whales and porpoises jumped gleefully alongside our boat, stopping only to tell us it was time for our mid-journey nap. These were our dreams.

Not thrilled about the idea of getting back on a ferry, Max made it clear that he’d prefer to travel by time machine, and provided a quick Lego mock-up to drive his point home. Sorry, buddy. 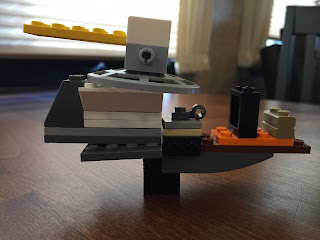 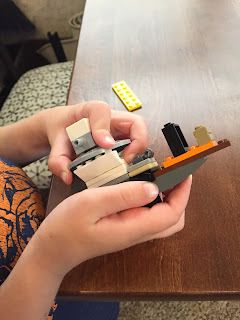 Arriving the required 2 hours before departure, border patrol agents headed into our camper in search of soil or potatoes… or the dreaded soiled potato.  Apparently there are some really nasty and grossly named potato diseases in the Newfoundland soil. Nova Scotia obviously wants nothing to do with Newfoundland's "potato warts," "potato canker," or "potato nematodes," and we really can't blame them.  Mark giggled and commented "Newfoundland: You can take your memories, but you sure can't take the dirt."  Soon after, we were waved ahead to the wash down station. 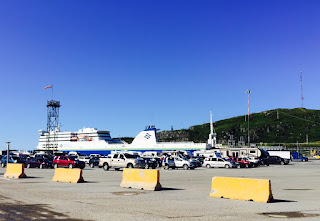 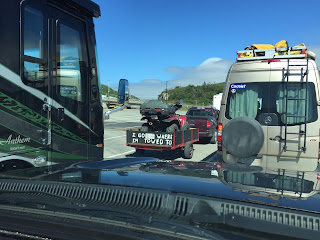 When Max was little, he loved car washes and always asked “Why are car washes so soapy?” He would then answer his own question with “Clean cars!” 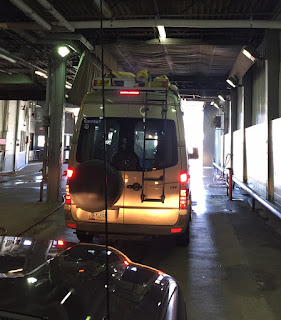 Baby Max would have been disappointed at the end of this long, dark tunnel to find one dude and a simple garden hose instead of all the soap and spinning brushes one would expect for thorough soil removal.  After a 2 second glance, we were waved through this decontamination station as well, apparently not dirty enough for concern. 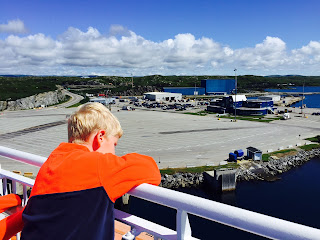 Once on board the ship, Mark and Andrew spied a hot dog stand with a very phallic bun-warmer/hot dog hole maker and placed their order immediately. 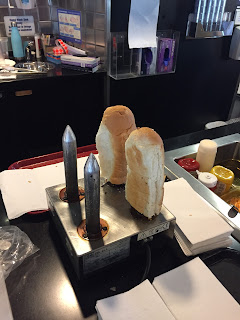 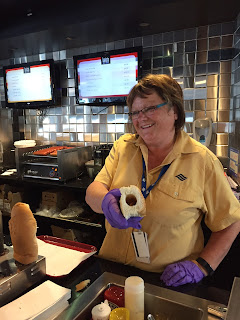 April and Max, having wisely passed on the hot dog, headed over to the ferry restaurant for lunch as soon as the ship left the docks.  It didn't take long before the seas were rocking and patrons were stumbling to their seats as the ship hit one wave or another.  Expecting glasses to slide off the table at any minute, April held tight to Max’s Sprite as he began to insist that the drink was not as good as 7 Up and that it was not making him feel very well. As the sub-par ferry-food arrived, Max did his best to nibble at his burger, all the while clutching his belly. In what seemed like the longest wait for a check ever, April finally boxed up the included desserts and stumbled out to the fresh air of the upper deck, pudding cup, plastic spoon, and sweet blonde boy in hand.

Queasy herself, she sent Mark a text:

“Out on deck. Max almost hurled. Have some dessert if Andrew wants some. Under the lifeboat that fits 150 people. Port side. That means left, right?”

In the middle of the Atlantic, with very little service, Mark surprisingly got April’s text and found her, huddled in the back corner of Deck 7's evacuation area, singing "The Lion Sleeps Tonight" as she rocked Max back and forth in the ocean breeze.

Offering to help but realizing there was nothing he could do, Mark spied the pudding cup and remarked on what a glorious find it was. Scarfing it down, April commented that he certainly seemed to have been spared the seasickness this time around.

With that, they retreated to the cabin, giving April a key to join them as soon as Max was feeling better. They said that they would have stayed longer... but there was no more pudding. 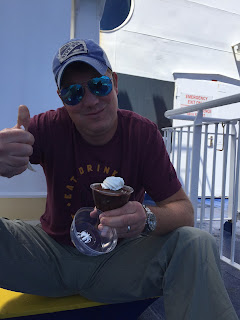 The cabin was comfortable and spacious and had a TV with 15 channels, but no window… so it was not without its share of tummy turning.  Max feeling better from his time outside but now wanting to lay down, April arrived in the cabin just as Mark was more than ready to leave, and quickly turned on some cartoons. Max was loving Canada's Treehouse TV but Andrew, sighting the program as “babyish,” asked if he could take a shower instead.  April showed him how to operate the shower and had just stepped out of the bathroom when Andrew threw open the shower curtain and began to gag out into the bathroom, yelling "I'm sick! I'm sick!"

We’re not proud of what happened next... but who is anyone to judge until they’re in a small cabin with two sick kids?

April jumped from her bunk, pulled the shower curtain between her and Andrew and used it to turn his face around as she yelled “Puke in the shower! It’s what drains are made for!”

Loads of poorly-chewed hot dog spewed in to the shower stall, the liquids being washed down into the sea by the boat’s perfect water pressure and the chunks remaining.  Just the sight of it made everyone even sicker, so April elected to clean Andrew up, get him into some dry clothes, and close the door on the whole thing. Both kids now in bed, Mark showed up 30 minutes later and was greeted with the following statement...

April: “The bathroom smells like barf and hot dogs. The shower floor is covered in partially chewed meat.  I can’t go in there.  I’ll be sick too. I don’t know what to do.”

Mark, the best dad ever, grabbed a garbage bag and got to cleaning.  A few minutes later, he emerged from the bathroom victorious and grossed out. He crawled into bed and fell quickly asleep, his occasional snore the only thing that bothered Max for the remainder of the trip. For the next 4 hours, the boys watched all sorts of random Canadian cartoons, all of which they’d never seen. Nothing short of a parenting miracle, they were entertained and quiet and clam.  There was no more puke. The seas, and tummies, had calmed.

As we neared the end of our journey, it was announced that we would dock in Nova Scotia in approximately one hour. April took Max up to the ice cream shop on Deck 9 for a chocolate cone with sprinkles and an hour’s worth of Legend of Zelda storytelling.  Mark and Andrew hung back in the room. As we met up to gather our bags and check out, April commented on how great the cabin had been...

April: “That TV! Wow! That really saved the day! It kept their minds off their tummies and it was full of brand new shows! The kids loved those cartoons! I can’t believe they watched that for 4 hours! We got so lucky! What would we have done without those cartoons?”
Mark: “Cartoons? They watched cartoons?”

April decided he must have blocked the whole thing out to protect himself from reliving the hot dog incident.

Back on solid ground, we practically kissed the potato-wart-free soil of Nova Scotia as we drove off the ferry and drove toward Kluskap Ridge RV & Campground .  We were starving but had no groceries (you have to turn your propane off on the ferry, which turns off your refrigerator), so we were thrilled to find Captain Caper’s Fish and Chips just down the road. Highly recommended as  the "best fish I've ever had” by the campground's owner, we eagerly pulled up a stump (because that’s the cool way to make a chair now) and watched magic be made in this tiny food truck. 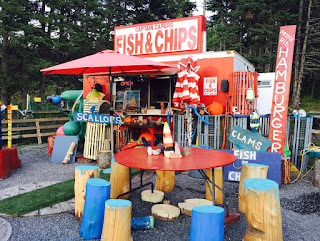 Huge pieces of fresh Haddock were dipped in some sort of mayonnaise concoction, deep fried, sprinkled with a homemade sea salt blend, and topped with homemade curry tartar sauce.  Outstanding.  So good that when Max dropped a half of a piece of fish on the ground, Mark audibly gasped.  Andrew begged to come back before he’d even finished his meal. Certain that we were satisfied, the owner, Moe, gathered our family for his TripAdvisor presentation.

Sticking his fingers through the provided rack card holes, Moe explained how excited Mr. Piper gets when he sees a new 5 Star TripAdvisor review. He then turned up the radio and bounced his fingers around to make Mr. Piper dance, ending with Mr. Piper spreading his fake finger legs.  The family eating at a nearby table was horrified, but Mark laughed and Andrew asked for him to turn the music up even louder so that he could bust a move. Good times were had by all, and April immediately emailed Buzzy to add holes to the Decibels Audiology rack cards. Dancing ear holes is just what we need to sell more hearing aids :) 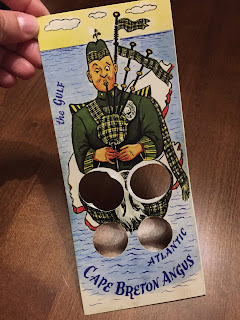 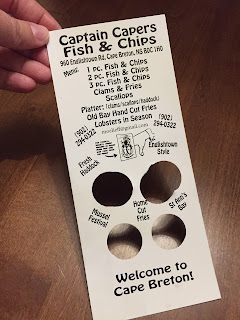 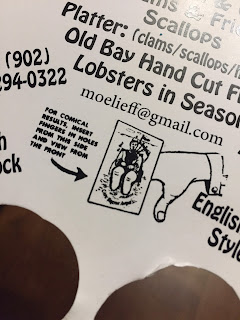 Full and thoroughly entertained, we busted a move back to our campground and went to bed, dreaming of exploring Nova Scotia tomorrow!
By The Royan Family at August 02, 2017