The Long Way to Newfoundland

We consider ourselves to be fairly seasoned travelers, but even we took a step back at least a dozen times before we had the balls to book the 17 hour ferry from Sydney, Nova Scotia to Argentia, Newfoundland. With our kids. Overnight.

What was on our mind, you ask? Well, the Titanic, for one.  Night sailing. Icebergs (2017 has been a "banner year" for icebergs in Newfoundland). Leonardo DiCaprio. All of it. In fact, Cape Race, Newfoundland was the closest point of land to the Titanic the night it sank, its wireless station near the Cape Race Lighthouse receiving the ship's cry for help.

Third, is this sooooo dumb? We don't even have a guide book... or a map.  What are we doing? We only know one other person who has ever even been to Newfoundland... but she (Erin Reichert) is so cool and seems to have great taste and she loved her time with the Newfies. And she gave us a whole paragraph of Newfoundland suggestions via Facebook Messenger. Plus, we read 4 or 5 mom blogs on "Things To Do with Kids in Newfoundland." Surely that's enough? Right?

Fourth, our massive camper. Driving it. On a ferry. Off of a ferry. This fear had calmed itself slightly since we'd already ferried from Prince Edward Island to Nova Scotia, but that ferry was child's play compared to this giant open-water cruise-ship-looking no-nonsense ferry.

Due to our vehicle size, we arrived the required 2 hours before our 5:30pm departure and checked in via the "commercial" lane.  A very friendly attendant answered our questions and found us quite amusing.  As we waited for her to process our paperwork, we rolled down the windows and admired the beautifully sunny day.  Two seconds later, ice started to fall from the sky. Hail.  Lots of hail. In July.

Five minutes later, the hail subsided, the sun returned, and we were ushered onto the vessel.  We followed behind semi trucks and other campers through the narrow passageways of Deck 3 until we were expertly parked, bumper-to-bumper, for the night.  We turned off our propane as required, hoped the blocks of ice we'd set in our freezer would keep things cool until morning, and grabbed our overnight bags and room keys.  Time to get our ferry on! 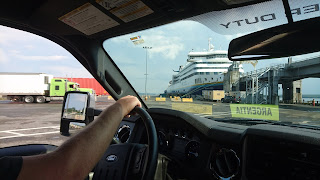 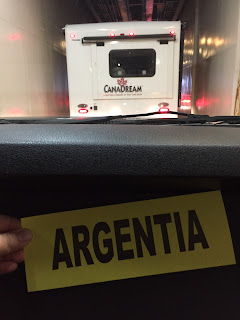 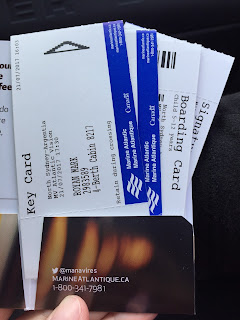 Once aboard, we took a walk around the deck as the crew readied for departure.  We were suddenly surrounded by heavy fog and some serious wind.  The kids humored April with a few pictures from inside her jacket, and then begged to go inside. 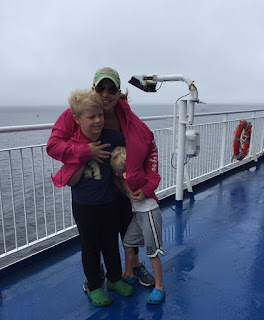 Considering that they had a long night ahead of them, Mark tried to make the "outdoor time" last a little longer with a few games of "See if you're able to walk into the wind!" and "Who can do twenty jumping jacks?"

His efforts burned at least 30 minutes. Only 16 hours and 30 more minutes to go! 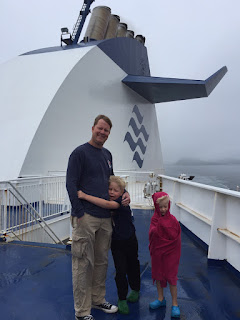 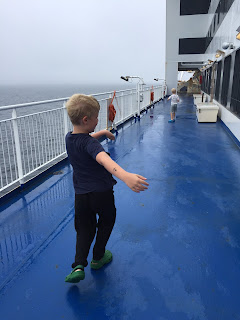 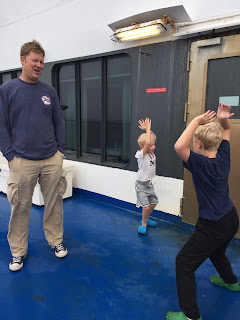 Once we set sail, the ferry/discount cruise ship came alive. The bars opened, the casino (which turned out to be just an arcade... sigh) filled with disappointed adults and children begging for change, and the ships' two restaurants opened their doors to hungry customers.  Two options lay before us... a buffet or a classy-ish establishment serving steaks and salmon. Mark, a hater of buffets but a lover of Buffetts (both Jimmy and Warren), chose the classy establishment.

Not long after our kids had ordered their New York Strip with Port Wine Reduction and their Teriyaki Salmon, the ship hit open water.  A slow, nauseating roll commenced. With vodka and a Transderm Scop patch on her side, April was in the best shape of the bunch. Mark and the boys slowly turned green.

Mark knew why he felt sick, the kids didn't.  As the food arrived, Andrew took one bite and said he wasn't hungry. Max did the same.  "Mom," Andrew said, "I just don't feel like eating. I want to go back to the room."

It was now almost 8pm so we took another walk around the decks, perused the aisles of the gift shop, and finally climbed the stairs to the 8th floor. Our room had no windows but was surprisingly clean and smelled amazing. Side note: It was also the spitting image of Royal Caribbean room we had for Mark's 30th Birthday Cruise back in 2010.  Not a lot of floor plan creativity happening in the world of cruising, apparently?

The discovery of bunk beds and a bag of pretzel chips distracted the kids long enough help settle their tummies, and the in-room shower with the best water pressure ever was just what they needed to get them back on track.  Everyone crawled in to bed, exhausted.  As we started to fall asleep, the kids took our silence as their cue to giggle and smack each other around for an hour.  The ships horn (which blows alllllllll night long... over and over again....) marked the passage of time as the kids repeatedly exclaimed that they were "just not tired." We wondered if they'd ever fall asleep. 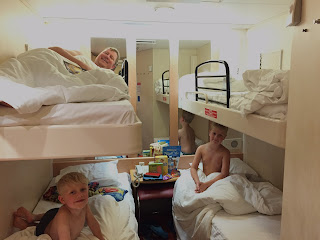 "Any kid who goes to sleep right now can have a Canadian coin in the morning," Mark announced. 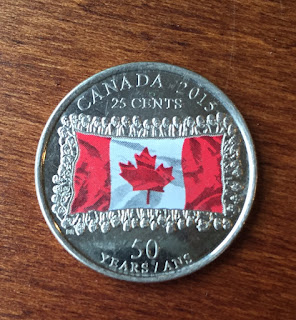 Somewhere around 5:30 am in the Newfoundland Time Zone (which is a real thing... and oddly adds just 30 minutes to the Atlantic Time Zone) Andrew woke up. Having no windows in our berth, and having no idea what time it was, he decided to start his day with some karate kicks. And then some meditation in the mirror. And then Mark took him for a walk and a bagel. Best hubby ever. 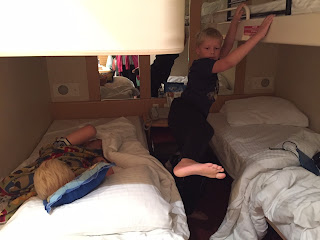 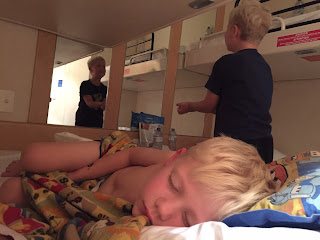 Around 7am, Max and April emerged from the cabin and headed to the buffet for breakfast.  Max took the all-you-can-eat offer seriously, polishing off 3 pancakes, 6 pieces of bacon, 2 vanilla yogurts, a plate of watermelon and grapes, and two hot chocolates.

Mark and Andrew were less enthusiastic, Andrew full from his bagel and Mark feeling his hatred of buffets and the roaring of the seas simultaneously, he headed out to the deck to calm his stomach. 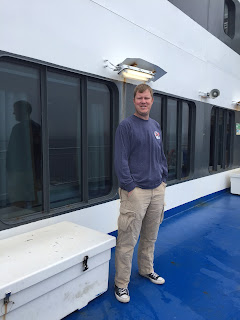 Ready to warm up, Mark made his way inside and found us a table in the Havana Club (a cute room with card tables, board games, and playing cards). Andrew decided he'd like to learn how to play poker. Max liked this idea as well. Super Dad obliged, dealing cards as his tummy turned. 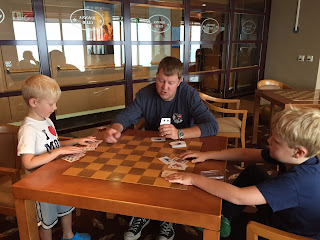 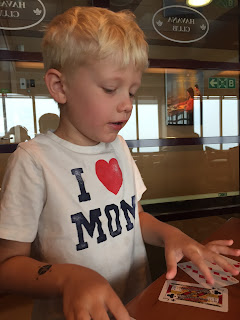 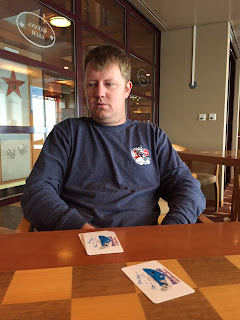 Hours later, somewhere around 10am, we pulled into port and saw the rugged coastline of Argentia, Newfoundland, blanketed by fog.  Our bunks packed up and ready to go, we waited to be called down to Deck 3 to be reunited with F350 and Jayco. 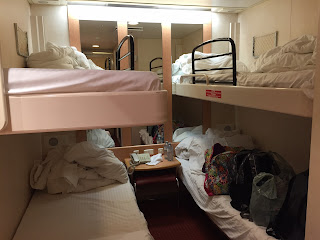 Back in our truck and one of the first vehicles to get off the ship, Mark and Andrew perked up and began snacking like crazy at the sight of dry, stable land. 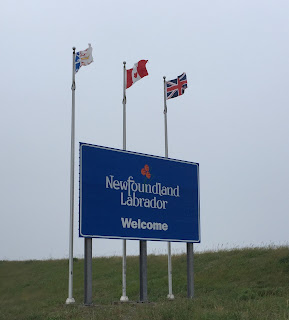 Here we come, Newfoundland! We can't wait to see your amazing coastline, your Jellybean Houses, and maybe even a whale or two? Who knows what we'll find?  Adventure is out there!