The Worst Campground Ever

On Wednesday, June 14, we awoke, tired and cranky.  Long drives and several late nights were wearing on us, and we'd had enough of the Midwest and its roads that have been ravaged by this thing they call "winter."

Our kids, who had been patient and amazing for the past 1000 miles, had officially grown tired of their movies, their tablets, their snacks, their car games, each other and us.  They wanted one thing, and one thing only... to get to Noblesville, Indiana and the home of the Southworth family. 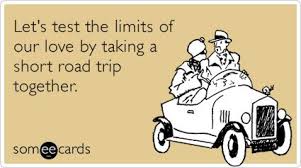 A week earlier, while trying to reserve a Noblesville campground, April had found that nearly everything was fully booked for the upcoming Father's Day Weekend.  Out of options, she stumbled upon a one-star Google review for a place called River Bend Campground.  The review warned of shards of glass blanketing the riverside. April dug deeper. 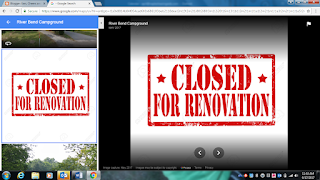 Faced with calling this place or missing a visit with the Southworths entirely, she called.

The man who answered was... different. He sounded as though he had just been lifting something very heavy.  He told April that the campground was on the river but had recently flooded.  He told her that he had lots of sites but no way to tell which amenities worked. He asked why she was in town, and wanted to know her exact reason for camping in Noblesville. To make things more precise, the man offered up 3 options from which he asked April to choose:

Being that we had no idea what race he was talking about and no intention of staying in Indiana for Father's Day, April weirdly chose: a graduation.

Don't judge the lying. Desperate times and the pressure of multiple choice.

Agreeable that a "graduation" was a good reason to subject oneself to Indiana, the man told April a lot more things... most of them about how hard he'd been working to fix the campground after the devastating flood and how he'd be sure to save a site for her.  He declined to take her name or phone number, though. "I'll remember. Just call to confirm when you're on your way," he said.

Now Wednesday, April called River Bend Campground once again.  This time, the man's wife answered. April reminded her of why she was calling, and the wife echoed the husband's story that the campground is a recently-flooded shit-hole and that they're doing their best to clean it up.

Out of options, April shuddered and confirmed that we were about 200 miles away and would arrive that afternoon.

Lady: "200 miles!?!? Where are you? Why would you come that far just to stay in Noblesville?"
April: "Ummmmm... we're somewhere in Kentucky. But we'll be there."
Lady: "Why would you come allllll this way? That's so far!"
April (attempting a little more spunk and effort this time): "We've come all the way from Florida! We're on our way to Canada!"
Lady: "Canada?!?! Why would you want to go that far!??!?!"

April considered going back the the "graduation" story but realize it was too late.  The lady went on to explain that they'd wait around for our arrival, but they had a weekly date night planned that they can just never can seem to keep, so she couldn't make any promises.

Having spent hundreds of nights in many a campground, and having never been asked for a reason for their stay or having been subject to such a phone conversation before, April chose this moment to inform Mark that the River Bend Campground mayyyyy be a little shady. Maybe. 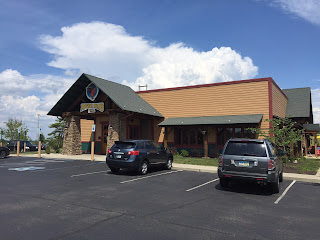 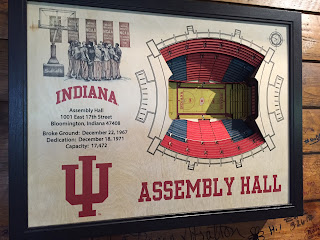 It was here that Andrew realized his long time dream of drawing on the wall with a Sharpie. He literally jumped for joy when he found out this was allowed, and declared this to be one of the best lunch stops of his life. 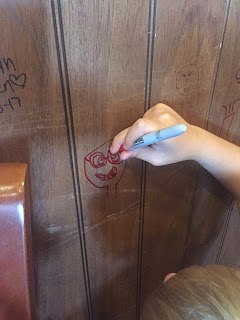 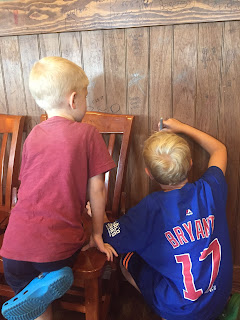 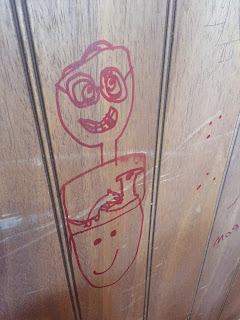 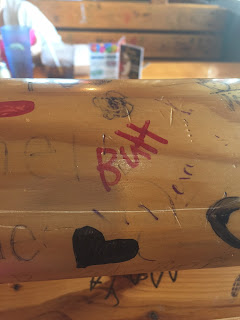 Max was much more in to the pizza than the drawing, ordering his signature pepperoni with NO cheese, and then declaring the pepperonis too spicy (which is what happens every time he orders pepperonis). 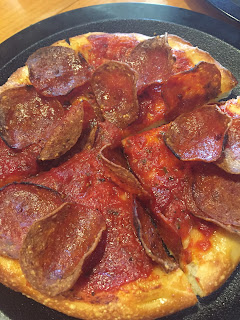 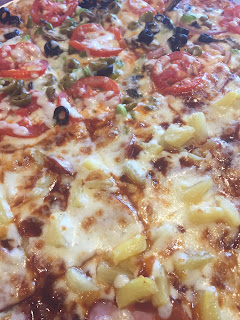 The pizza was great but the Greek Salad was ahhhh maze ing. Kudos to your salad dressing department, Mother Bear's, you nailed it.

Now firmly planted in Indiana, we again called the River Bend Campground to let them know we were stuck in traffic, but on our way.  This song and dance is not usually required... normal campgrounds just give you a gate code and a site number and leave you be...but the particulars of their "campground renovations" required that the owners to check us in personally and escort us to our sight, they explained, to "make sure stuff works."

We cannot tell you that, however, because, much like our "graduation" plans, this campground was a load of poo. Literally.

First, the smell.  Combine recently flooded river bend with temporary porta-potties and a selection of sewage drain stations that were not properly draining. Then, combine those potent aromas with the smell of the worst well water you have ever encountered.  As people that have a well, who have camped for years with well water, this was barely even water. It was more like aluminum and sulfur pouring from a faucet.

Second, the road. Much like their water wasn't usable, their roads were not exactly passable. Huge potholes full of muddy, stinky water, branches, uncut weeds. It took us 10 minutes to navigate the path to the "office." 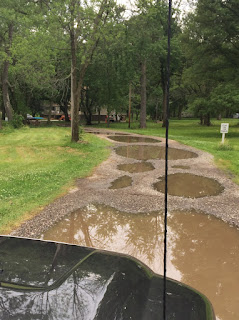 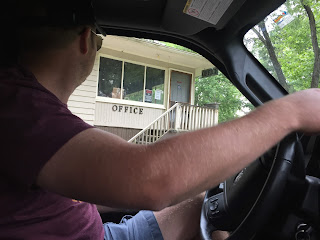 Finally, the rain. No sooner had we set up camp (while simultaneously calling the nearby KOA to ask if they'd had a cancellation), when it started to rain... again. And it started to flood... again.  Dark clouds covered our campsite and our dreams of a carefree week in Indiana. Eager to get the kids some exercise before the lightning began, April walked the kids over to a nearby cornfield and small patch of concrete for entertainment. 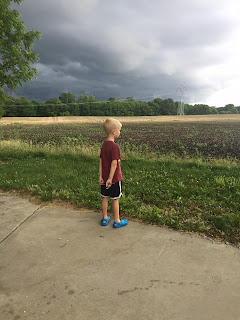 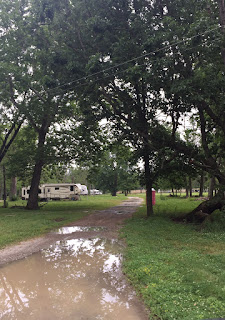 As the storm kicked up, we retreated to our camper, wide eyed and terrified of floating away mid-night. We pondered a scathing Google review (to add to the many already published), but decided that we had been adequately warned and that our decision to come nonetheless was ours (April's) alone.  "The Southworths are worth it," we told ourselves, as we drifted off to sleep, freshly bathed babies smelling of aluminum and sulfur.
By The Royan Family at June 17, 2017