Somewhere Between Kentucky and Indiana

Ahhhhh the repair shop. A second home to most RV enthusiasts, and a first home to people like April's sister, Amy (who writes a much funnier blog about her multiple RV breakdowns and near mental breakdown on her recent trip from Florida to Michigan).

Having finished up our one day of real Decibels 180 work at Rhodes Center for Better Hearing, we took Caleb's advice about a slide out problem we were having and visited Youngblood's RV Super Center in Mayfield, Kentucky.

What was the problem, you ask? Well, our kitchen would slide out, but not back in. We're no mechanics, but that's no bueno.

The day started simply enough, as Andrew, browsing the comics, found a word he didn't understand. He paused, pointed, and asked "Dad, does this make any sense to you? Because this sounds like 80s language that only you can decode."

Anywho... we headed to Youngbloods for a 9am appointment, only to realize that we were much farther away than we had expected.  We rolled in, sheepishly, 30 minutes late, and explained our slide out troubles. As we reviewed the problems with the service manager, Andrew bounded out of the truck, pulled down his pants, and peed in the parking lot. The Youngblood wasn't phased. 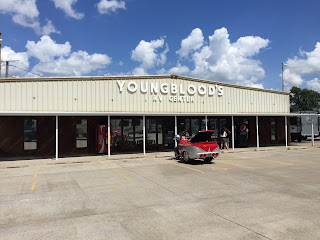 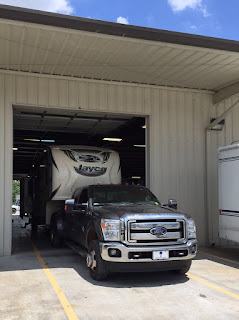 The Youngblood waved off our "sorry for being late" apologies and got to the business of fixing our slide out. He warned that it could take a while, this part being expensive and requiring pre-approval from Jayco, so he offered us the keys to a sweet Mercury, should we want to road trip to the local Walmart or Dairy Queen. High and mighty, we passed, assuming that we'd be outta there before lunch. 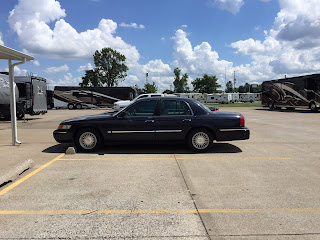 One reason we felt we didn't need the sweet Mercury was because there was a Cracker Barrel right next door.  While most of our many Barrel stops include us shooing our kids out of the gift shop in order to "get back on the road," this one came with an open invitation for them to browse as long as they wanted. And browse they did, staying there for almost 2 hours before we elected to mosey back to Youngbloods and check on the camper. 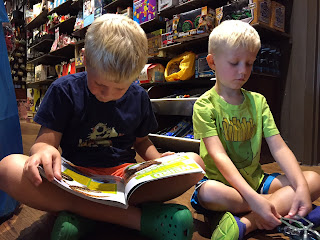 Repairs not complete, and the clock now striking noon, we again declined the keys to the Mercury and instead made ourselves comfortable in the Service Lounge.  The lounge included a selection of hand-painted bird plates (as documented in the picture below), some geometric red furniture, and a TV that claimed to have 52 channels, but actually had 6. Any of these 6 were guaranteed to turn to static just as a desperate parent had finally found The Empire Strikes Back and just as both children had stopped beating he crap out of each other long enough to both, silently, focus on one thing. 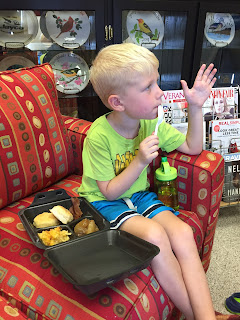 Mark made small talk. April played with the kids. Max ponied up on the couch and ate his leftover Barrel, snagging a spoon from the coffee bar. This kid can be happy anywhere.

From our tucked away home in the Service Lounge, we did our best to breathe deeply and get some work done on their WiFi.  Like clockwork, however, other "road people" came in to grab a coffee or check out what was on the boob tube.  Like us, they looked exhausted, unclean, and exasperated from whatever was their repair situation. One thirty-something dude was befuddled by the Keurig. One older couple was trying to get the Youngbloods to service a part they had bought somewhere else, on a camper they had bought somewhere else... 20 years ago.  They wanted free service and a free vehicle for their length of stay. They were not offered the Mercury.

Clock striking 3pm, we were informed that there was a hold up with the Jayco repair approval. Mark considered retreating to the corner and crying like a little girl, April wondered what would be worse: sleeping in the Service Lounge or sleeping in a local Kentucky motel.  The Youngbloods again encouraged us to use the Mercury.   April suggested they just give it to the older couple. The Youngbloods insisted that the Mercury had been reserved for the clueless family with two blonde boys who seemed to cling on to the hope that their trailer was going to be fixed at some point today.

Then, a miracle.  A Youngblood rounded the corned with a beaming smile and a message of "all fixed!" We rejoiced, they rejoiced! The older couple got the Mercury. 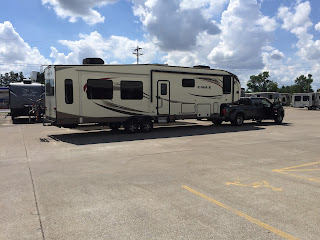 Finally we were FREE!!! God bless America! The open road! Let's have some barbecue!

We found Dave's Sticky Pig somewhere between Paducah and... we don't know... Indiana, maybe? It was located smack dab in the middle of two hearing aid shops, one Audibel, one Beltone.  April pondered why she had never set up an Audiology office next to the delicious smell of smoked meats. She felt ashamed of her poor office location choices, but decided to just continue on and instead eat her feelings. 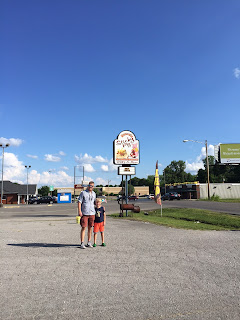 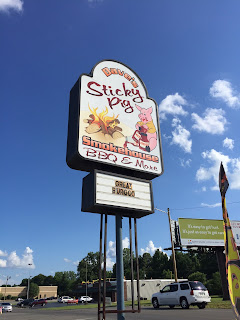 The meat was great, but the sides took the cake.  Best green beans ever, and the baked beans and mac were tops as well.  Max ordered just peach cobbler, then declared it "too cobblery." Never mind him, the rest of the Royans left full and happy. 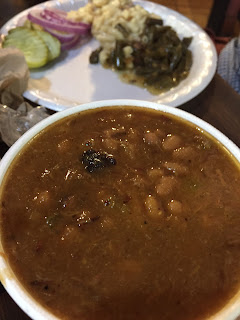 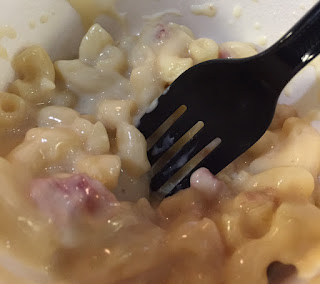 We skipped back to the Big Lots parking lot that housed our rig, and popped in to stow our leftovers in the fridge. Here, we were greeted by yet another repair. We all took a moment to ponder sobbing.

The bathroom mirror had wiggled off its hinges and was hanging by just one loose screw. Thankfully, we caught it just before it crashed to the floor.  No worries, Mark is an expert at dealing with things with "a screw loose" (he's been married to April for over 10 years!), so the Eagle Scout produced the necessary screwdriver and screws and put the thing back together in a jiffy.  Our hero! 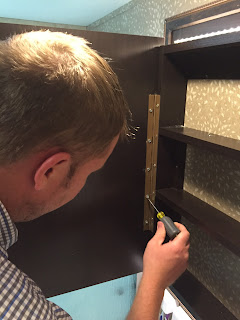 Following our day of repairs and heavy barbecue, we only had about 100 miles worth of driving in us before we just couldn't keep our eyes open anymore.  As the children took our exhaustion as a cue to talk constantly, we gave up and called it a day. We got off the road and set up camp at John James Audubon State Park, which apparently has a ton of cool stuff to do. We did none of it.  We did attempt to point out a deer in the woods, but this just brought on so many loud shouts of "Where?" from our kids that the deer ran away.  Grumpy parents and grumpy kids, we took note of a turd laying on the ground at the nearby dump station and surmised that this day needed to be over.  Goodnight, wherever we are.  Tomorrow will be a better day! Bring on Indiana!
By The Royan Family at June 17, 2017