Ahhhhh sweet Nashville. Music City. Home of the CMA Awards, CMA Festival, and the Nashville Predators Stanley Cup Game 6. All of which, to our surprise, were happening during our weekend visit! This is going to be "a hoot".

As we neared Nashville and traffic slowed us down, we struggled with rather sparse offerings for dinner. Starring down exit after exit of Wendy's or McDonalds choices, we collectively decided that Wendy's must be the "healthiest" option available - because they are "willing" to serve a potato baked as an alternative to fried. We navigated the rig into a nearby deserted parking lot and made our way into the house that Dave built.

Andrew, arguably the hungriest of the bunch, scarfed down his cheeseburger, fries and frosty with all the efficiency of a wild wolf.  He noticed the well placed sign at our table, thoughtfully reminding us that kids meals are only $1.99 after 4pm, so he asked for two bucks and ponied back up to the front counter and ordered himself another round.

Not only did Andrew take the bull by the horns and order his own meal, he noticed the carefully placed advertising and - much like Baxter in Anchorman - he pretty much ate the entire wheel of cheeseburgers. We were actually quite impressed.

All was well, until the last bite of his cheeseburger, which just sort of fell out of his mouth in slow motion and landed with a thud on the table as he announced that he did not feel so well.

Moments later, he rushed off to the bathroom with no explanation. Of course - he chose the nearest door - which happened to be the lady's room. Mark let April know that she was up to bat on this one. Somebody had to figure out "what we are dealing with". April shuddered, got up from the table, and went to investigate. There are scenes that cement themselves in the human mind, that drill deep within the psyche and don't let go. Like that scene in GoodFellas when Joe Pesci goes off on the guy for calling him funny, or that part in Fargo when the officer lady discovers the dude running the woodchipper. What April encountered, was a scene that was not so different from these. The gratuitous violence came in a subtly different form. It came in the form of projectile vomiting. So much puke. The kind of puking that certainly cannot come from a small child.  Such cheap toilet paper with which to clean up the child, the walls, the floor, the toilet.

When he finally came up for air and took a break to wash his hands, another mom came in with her two little girls. The two mothers, hardened in the face of such carnage, exchanged knowing glances as Andrew once again let the puke fly... this time in to the sink.  Stranger Mom wasn't phased at all. April was slowly dying inside.

April and Andrew emerged from the bathroom with looks of terror, while Mark and Max, none the wiser, talked excitedly of getting back in the car.

By the grace of God, he did not puke in the car. In fact, he seemed totally fine after that one episode. However, he did raise an angry fist to every passing Wendy's sign and exclaim "You got me this time but never again, red haired girl!"

Some of us fed, some of us now hungry, we snatched up what appeared to be the last campsite in the entire town at the always delightful Nashville Jellystone Park. The kids were thrilled with the plethora of bounce houses and playgrounds. Mom and Dad were happy to have found a spot to lay their head in this over-booked town. After all, we didn't want to miss a weekend with our favorite gals, Megan and Jessica! 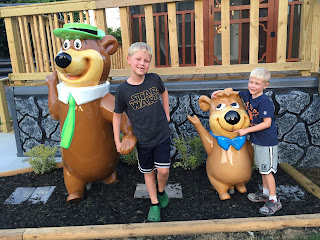 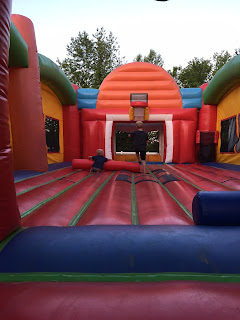 On Saturday morning, we awoke to a happy Andrew, a sunny day, and plans to meet up with Megan and Jess at the Nashville Zoo.

Maybe we are planted a little too firmly in the parent zone, but we sensed that Megan and Jess were perhaps not quite as excited about the Zoo as we were. In fact, we're fairly certain that they waited until we actually arrived at the Zoo before they even left their house, probably sitting around with Mimosas and magazines, wondering how they could minimize their time at the park. No matter, some stranger offered to take our picture as we "waited on our friends to arrive." 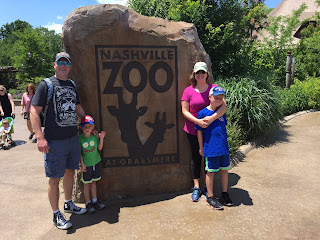 The girls finally appeared somewhere around the Meerkat exhibit, as they jumped right back in to their roles as our kids' favorite pals. They told jokes, they offered piggy back rides, and Megan used the Anaconda exhibit to teach Max the words to Baby Got Back. She was delighted that she'd made such a big impression as she sent Max over to April with his new lyrics in tow...

"Mama, Anacondas don't want none unless ya got buns, 'hon." 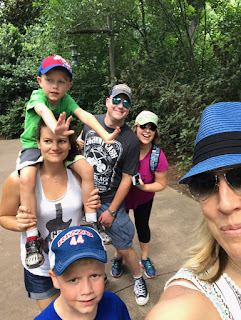 Fresh out of inappropriate lyrics to teach her Godchild, Megan was ready to take the first path to the parking lot as quickly as possible.

Animal lover Jessica, however, told us of a wonderful walk-through Kangaroo exhibit that allows you to pet little joeys in their mama's pouches, as they adorably peak out at passersby. The 3 adults (Mark, April, Jessica) put our heads together to figure out the closest path to the kangaroo exhibit. The kids (Megan, Andrew, Max) sighed and insisted they'd rather be at lunch. One of them was insistent that lunch be served with margaritas. Too bad, kiddos, off to the kangaroos! 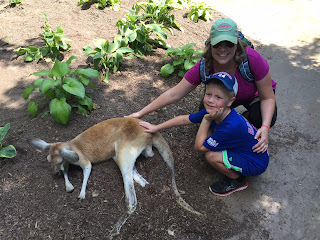 The Zoo was great fun... but the allure of air conditioning and and Jessica's cooking beckoned us back to downtown Nashville for a happy hour at the cutest house in town.  Snacks, steaks, gin, wine, Mexican Train, and Euchre. Nobody has to work tomorrow, right?

The boys begged for a sleepover (and there was obviously no way we were driving anywhere), so we invited ourselves to sleep in their guest room. In exchange for them feeding us, entertaining our kids, and letting Mark win at Mexican Train and Euchre, we insisted on ordering pizza at midnight to help soak up the Whiskey flights they had poured for Mark's tasting pleasure. 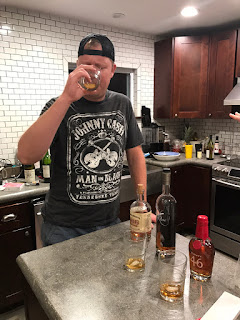 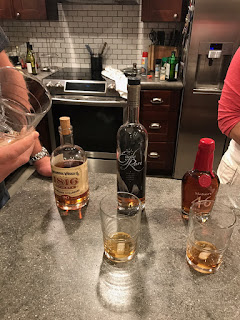 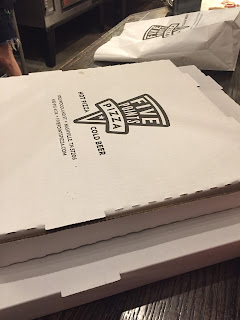 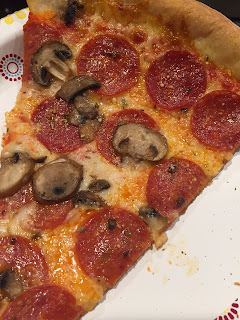 Even the boys sleepily toddled off the futon and joined us for the midnight pizza party, feeling very grown up about the whole thing.  Anything goes at your Godmother's house, so they topped off their midnight pizza with ice cream bars... because Megan said they could.

A good night's sleep, some morning Cocoa Puffs and a bubble bath later, it was time to head North! Thanks for the fun times, Nashville, we're on our way to Kentucky Lake!