Ready to hit the sand running, we packed up our first picnic of the summer and drove out to Sleeping Bear Dunes with a taste for adventure and the Grand Traverse Pie Company's famous cherry pie. 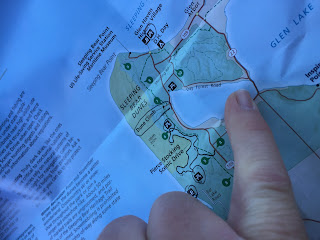 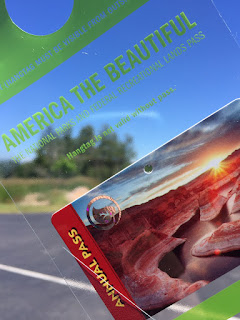 Sleeping Bear Dunes is part of the National Lakeshore. Upon arrival, Mark headed into the Visitors Center and chatted up one of the helpful National Park Service Rangers for advice on where to go and what to see. Nice Ranger Lady told him that the best picnic spot was up at the North end of the Park, on the waterfront. Heeding her advice, we pointed the truck to the Glen Haven Historic Village.

Admittedly hungry and perhaps even hangry, Andrew and April jumped out of the truck and secured a picnic table while Mark and Max parked. Max, a little put off that he was not the first child out of the vehicle, was proud to be the first one to read the sign explaining that this was one of the oldest settlements in the United States to still be standing as a workable town. Armed with that information, he ran to the picnic table to rub it in his brother's face and then launch into his sandwich. As Max snacked on his BLT, he once again perfected his Zoolander face.  The rest of us followed his lead, dutifully eating our fruits and veggies before we dug into the much discussed cherry pie. It was well worth the wait, as we all agreed that this was, indeed, the best cherry pie ever. 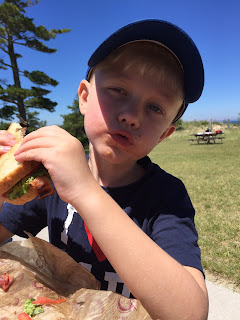 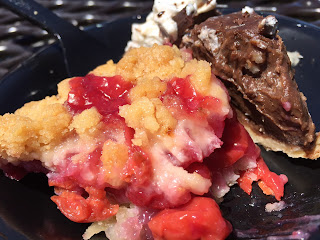 Wait!I spy two types of pie in that picture! Someone is neglecting to mention that we ate a second pie. Let's just forget this ever happened.

Following lunch, Andrew braved a dip in the frigid lake as the rest of us chose to soak up the sun from the much warmer beach.  As Mommy and Daddy relaxed, Max used the many rocks he collected as tools for the his "Doctor's Office" and performed a variety of "surgeries" on us to "remove germs."

Max: "Lay back and relax. This may hurt a lot." 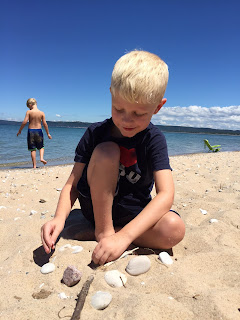 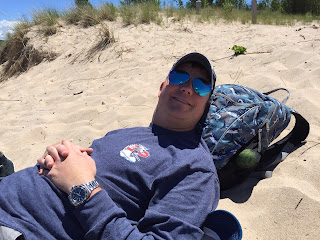 The historic lakeside village offered a glimpse into the cherry-canning-ways of days gone by. We walked the town and took in the many historic buildings and sites along the way. 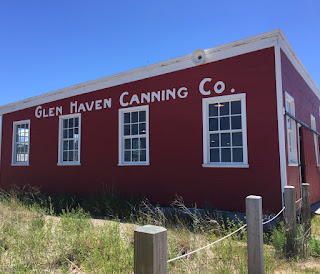 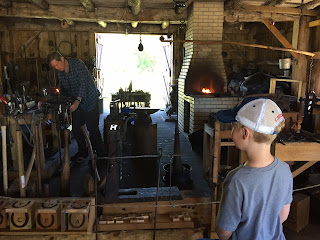 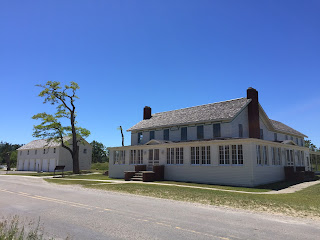 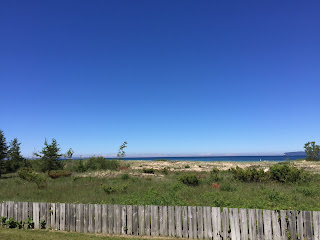 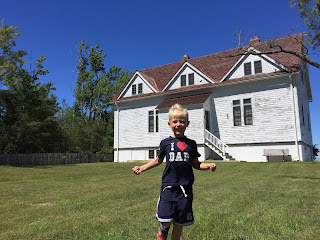 Ready to get our hands dirty and walk off those pies, we hopped in the truck and headed over to The Dune Climb.  Walking up hill is hard. Walking up a sand hill is much, much harder.  We huffed. We puffed. We guzzled water.  Andrew eventually elected to just lay face first in the sand and moan. Max, apparently much tougher than we all knew (but also way shorter and much lighter) surpassed us all. In fact, as we called it quits, we spied him cruising toward the peak of the dune above us. Mark took one for the team and went to fetch him... April "paused to take some pictures" as her heart almost exploded. She joined Andrew in the sand. Is it time to roll down yet? 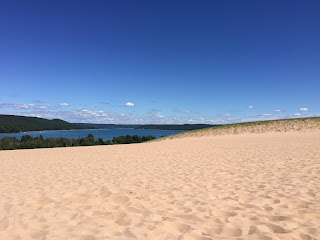 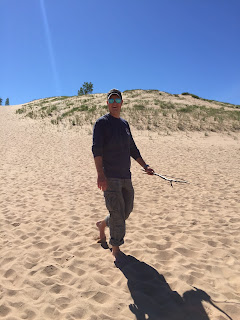 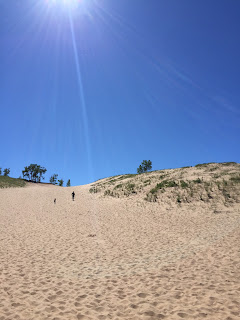 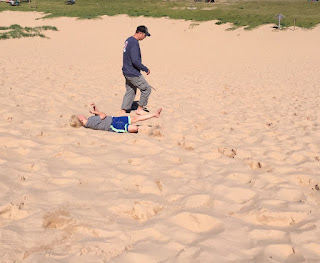 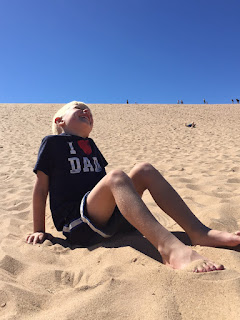 Sufficiently sweaty and sandy AF, we cruised over to the last POI in this National Park, the Pierce Stocking Scenic Drive. In general, we found this drive to be not so scenic, but we did applaud the deck near the end of the cruise that made for a great photo op. 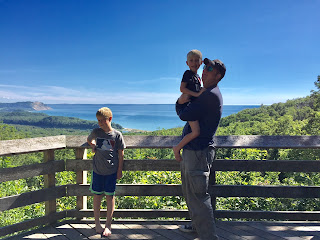 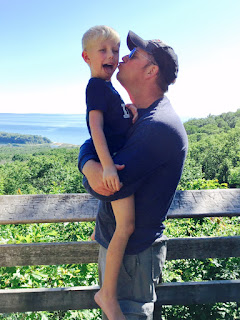 We may have come for the National Park, but our kiddos were most interested in catching a Traverse City Beach Bums game.  Front row tickets purchased and Cubs hats in tow, we headed off to the 7:05pm game with a couple of very excited boys. Sadly, Mother Nature had other plans. Rain began to fall and the game was cancelled just as we pulled up to the stadium gates.  Instantaneous, inconsolable sobs immediately wailed from the backseat.

Faced with two heartbroken and hungry kids, we turned around and headed back to the campground... unsure of what to do with our night.  As we drove, Andrew calmed himself enough to point to the side of the road and ask: "What's that?"

"That is a video store, son. It's a glorious entertainment oasis. Would you like to go?"

For the Millennials: Long ago, when Paula Abdul had a career and every gal had a Kirk Cameron poster beside her bed, video stores reigned. This was a time when children begged their parents to drive them to Blockbuster, hoping to beat the Friday rush for Back To The Future Part II or Dirty Dancing on VHS.  This was a world of Be Kind, Rewind.  This is a world long forgotten, relegated to its place in time before the rise of the Internet (Also, we encourage you to see the classic film "Terminator" which will explain how the whole Internet thing turns out). The video store is a utopia that our children do not know.

We explained this and so much more to our boys as they dried their baseball tears and pondered this entertainment concept. 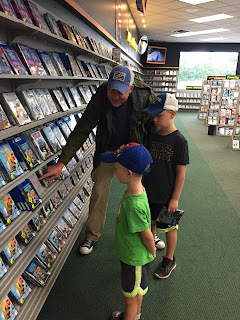 Three pieces of advice should you find yourself taking your children into a video store for the first time:

1. There are empty DVD cases with pictures on them, and then behind those cases are the actual DVDs. Don't just grab all the cases with the pictures. That will require a lot of re-wandering the video store.
2. Though the excitement and nostalgia may overwhelm you, try to keep from loudly going on an on and on about how you can't believe this place is still in business or that these nice workers are still employed (for now) at this fantastic relic of a business model.  It will make the workers feel uncomfortable. Remember, they're caught in a time warp!
3. Think twice before you text your friend and say "This is crazy! I'm in a video store!" Prepare that she will assume you mean an adult video store... because she, like you up until several minutes ago, did not know that regular video stores still existed. It is not appropriate to take children to adult video stores.

Side note, Family Video has a fantastic business model. Genius, actually. The joke is, indeed, NOT on them. Our experience was fantastic, our kids were entertained for days with movies and WiiU games that they had never seen before, and our total cost for this experience was $1.50 out the door. Bring back the video stores. God Bless America.

More than just Family Video, Traverse City is also home to the National Cherry Festival, Gallagher's Farm Market, a fab bike path called the TART Trail (on which we very comically committed to helping our kids ride their bikes... and then decided a mile into it that playing in the park was better), a selection of killer food trucks at The Little Fleet, and one of the nicest campgrounds we've ever stayed at, Holiday Park Campground. 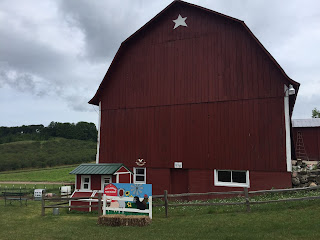 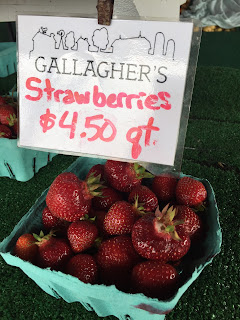 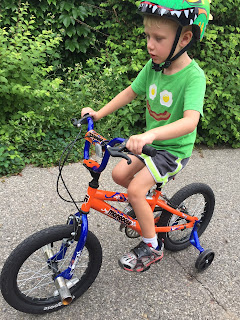 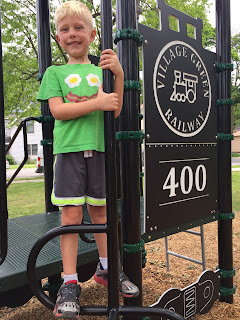 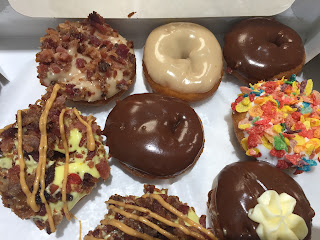 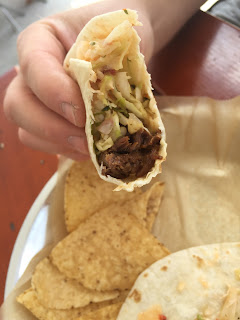 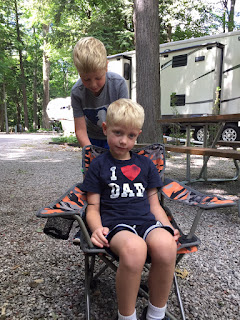 Mark tried to convince April to throw caution to the wind and stay in Traverse City for the rest of the summer, but she kindly reminded him that Northern Michigan is calling! Sadly, we must move on!

Before we sign off, we would be remiss not to mention a long time friend of Mark's and one of our most avid blog followers, Marc Scott. Marc passed away this weekend, doing what he loved... being a crazy cool aviator and flying crazy cool planes.  He was Mark's childhood bestie and an all around amazingly great guy. He was also a fellow RV traveler / adventurer and one of the most positive people we have ever met. We are blessed to have had him touch our lives. Our thoughts and prayers are with his partner, Russell, and his wonderful family that survives him. We love you all! The world won't be the same without you, Marc, but you will always be in our cherished thoughts and memories!
By The Royan Family at June 28, 2017