3 Days in the District


Remember during the 1st episode of the 2nd season of House of Cards... Frank and Zoe are just having yet another annoying argument in the Metro and then all of the sudden he.... well... you know.

But there was travel drama!

Let's go back to the June afternoon that we drove from Williamsburg to Washington DC....

We were driving from Williamsburg to Pohick Bay Regional Park in the Washington DC area. As the journey came to an end, we got off the interstate and took the ramp around a blind corner that would take us under a bridge.

It signaled, very clearly, that this bridge had a maximum clearance height of 13 feet, 4 inches.

Mark started braking.. and at the same time trying to do the math -- how many inches is 13 feet 4 inches?

April said, "What?!? What's the problem"

Mark stammered out, "Bridge...I think its too short"

Mark frantically searched for someplace to bail out, and avoid the obstacle...there were no options.

"What are you talking about", April was annoyed.

To brace for impact, April decided to offer no help whatsoever except to grab the "oh shit" handle and to pull on it so hard that she lifted her body up and out of her seat.

Mark didn't have the heart to tell her that this act would in no way lower the height of the fifth wheel dragging behind them.

As we came under the bridge we waited, and listened, and braced ourselves for crash and shudder that would indicate massive roof damage to the camper and loss of an air conditioner. A moment.....that did not happen.

We cleared the 160" bridge without a problem.

We have since measured and our camper is 159." 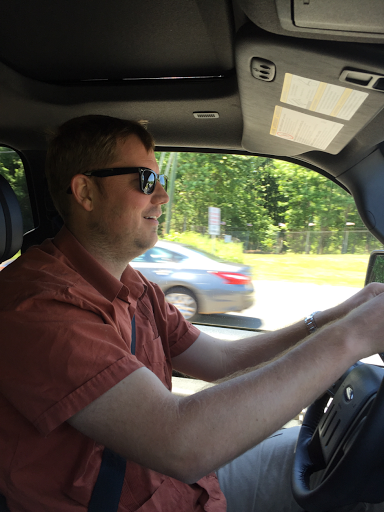 With a renewed zest for life following their near catastrophic bridge encounter, we left the fifth wheel at the campground and decided to bravely venture into the Washington DC metro area with the F350. Parking a dual wheel heavy truck on the streets of DC is no joke. But Mark totally rocked it and found a space just a stones throw from the Smithsonian museums.

Mark hates crowds, but loves gatherings... LOL... so we walked across the National Mall to the Smithsonian National Museum of Natural History. Dinosaurs, mummies, and bugs! Oh, my! Happy children!

After all that free museum hoping, were were hungry! We hoped in a super fun Pedicab ride and got a mini tour of DC on our way to the fantastic Ella's Pizza! 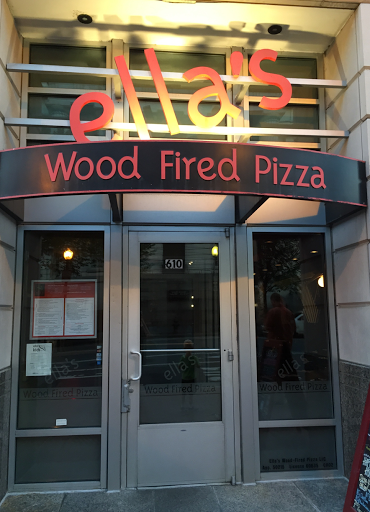 After dinner, Max got a super cool Sponge Bob ice cream from a street vendor that was most certainly made from entirely artificial ingredients.  He was intrigued and perplexed. Later, he started to glow. 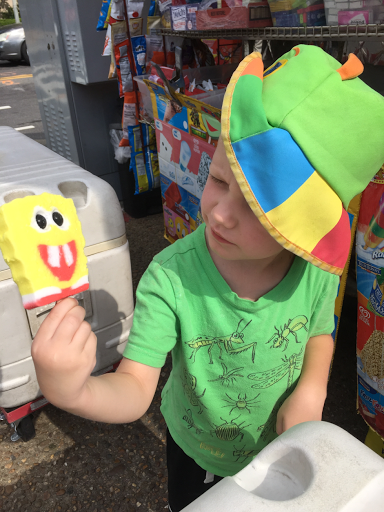 Monday morning came around and we decided that we would definitely not be braving the DC traffic on a week day. We had rolled the dice quite enough on Sunday, thank you. So, into the city we would go....by train!! 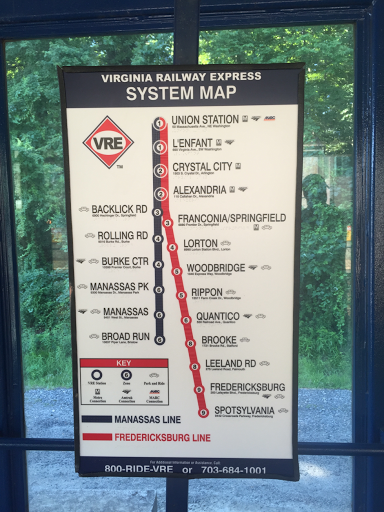 We had no idea what the sign pictured above meant. So, we proceeded to the ticket booth to ask directions (and get a ticket). After purchasing our VRE and Metro tickets from the least helpful ticket booth attendant in the history of mass transit, we caught the final commuter train (VRE) into the city.

Unbeknownst to us, we boarded the train in the "Quiet Car". Yes...that's a thing. Fortunately, 3 out of 4 family members are capable of being fairly quiet.

The one working the camera below does not do well with "Quiet". 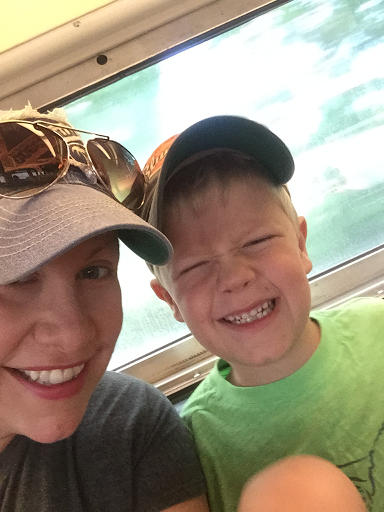 Once Mark finally convinced April that she HAD to stop talking, a request she continued to question at an unreasonably high volume, she settled for taking pictures. Here's an example of what happens on the train when your children are clones of their father... 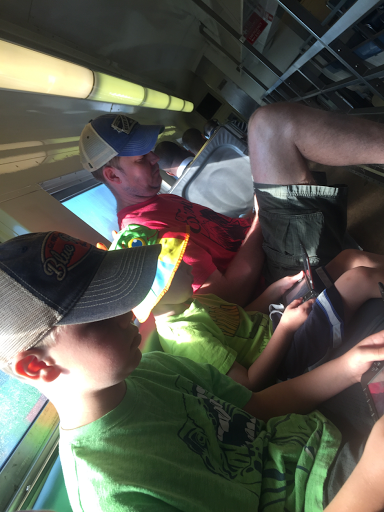 Off the train and in to the city, our first stop was the International Spy Museum in Washington DC. A secret identity is required, and Andrew happily became Colin Walker, 18, from England. Upon assuming this identity, he wanted us to make a bee line for the nearest pub. He's just like his mother. Just kidding, that didn't happen. 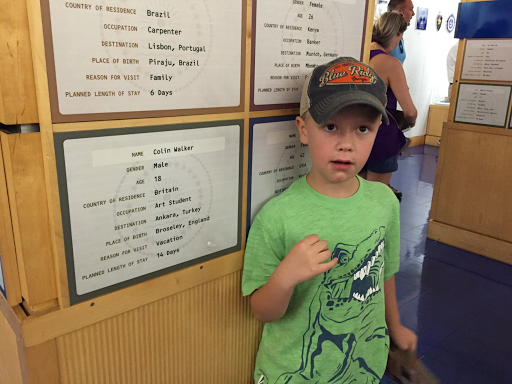 Max tried his hand at intercepting enemy chatter. From the look on his face, I'm pretty sure it's Russian. He doesn't think much of commies, mostly because he realizes that the ideology is entirely unsustainable economically and fosters egregious corruption while stifling individual rights. 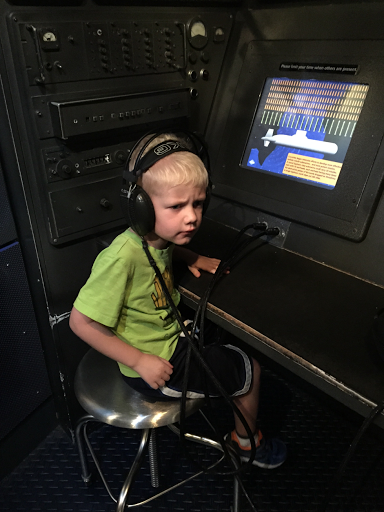 Trip Advisor pointed us straight toward Jaleo for lunch - a super hip tapas restaurant that has tables with Foosball under the glass. 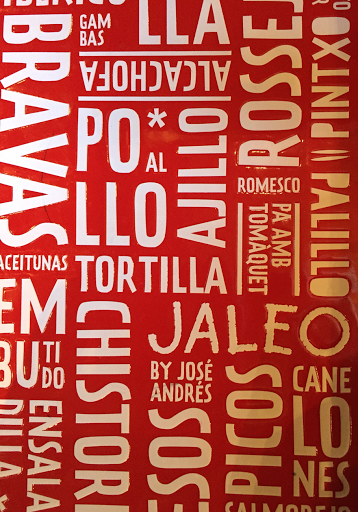 I don't know what children usually eat at a tapas restaurant but ours were pretty pumped about chicken croquettes in a Chuck Taylor bowl. "I'm eating out of a SHOE!!!", exclaimed Andrew. See that other yummy food? They wouldn't touch any of that. 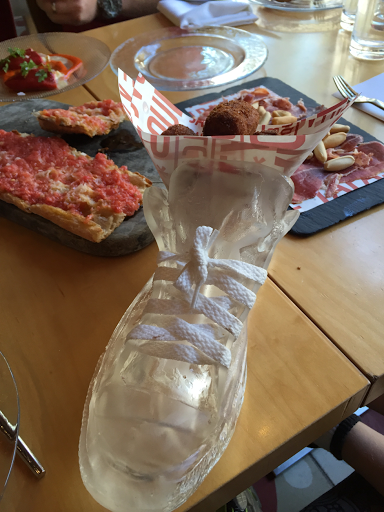 Trip Advisor also highly recommended the Red Velvet Cupcakery across the street... so we had some cupcakes as well to ensure that we never ever make Trip Advisor mad :) 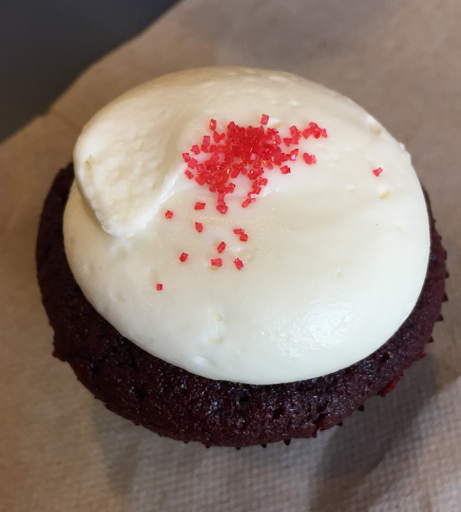 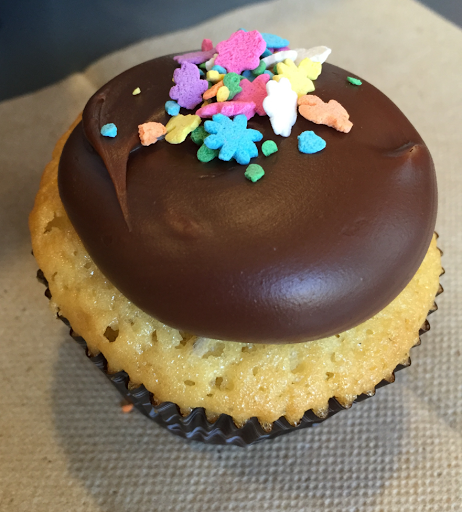 After lunch, we quickly visited the National archives to take a peek at the Declaration of Independence, the Bill of Rights, and the Constitution. This was all done with a 4 year old in tow that said "Dis is boring" at least fifty times. He's just upset because he can't read yet.

We told him to "Hush up and be grateful for your forefathers, son! Respect their foresight and your country! Your life is a cakewalk and wait until you have to really DO something in this world and effect change! Then you'll see the power of hard work!"

Kidding. We didn't say that... we just ignored him like the hundreds of other children licking the floor in boredom.

Much more exciting to the eyes of said 4 year old was the National Museum of American History. This place is sweet and super fun and it even has a very early camper on display! Yay! Campers! We love them! We're so American! 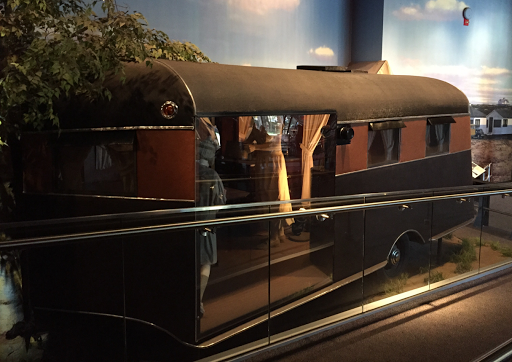 Note here... "But Mrs. Kate (insert Mrs. Royan) still had to perform most of the house chores that she did at home." 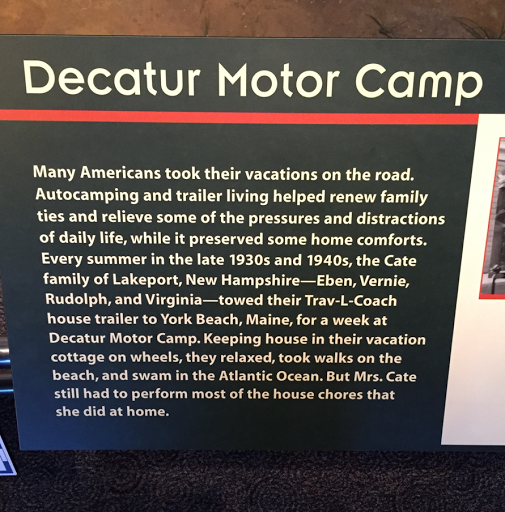 Other things to be giddy about at this museum include the real bottles from the blind Paris wine tasting of 1976, the "Judgement of Paris." See also: Bottle Shock. 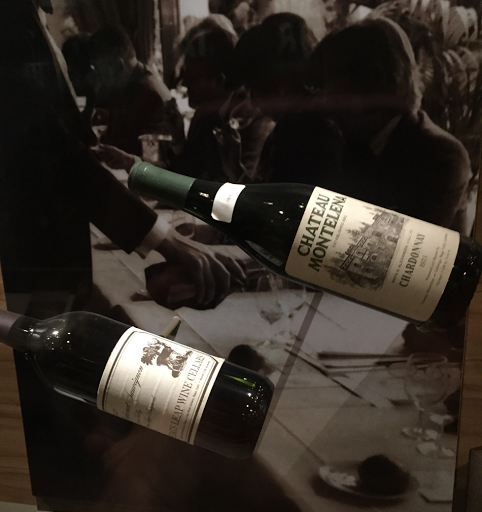 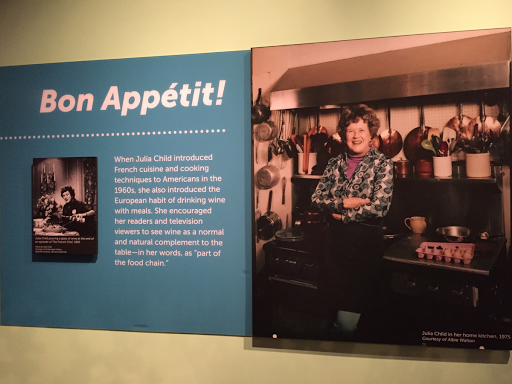 Having had enough of the big city, we braved the Metro at rush hour and (eventually) found our way back to our car. It was obvious where we parked - since Mark's truck sticks wayyyyy out of every parking space. 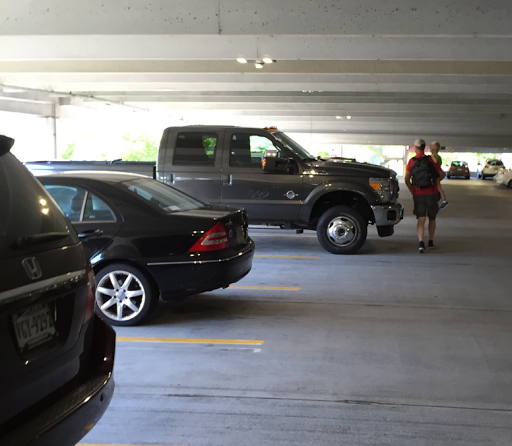 On the way home, we spotted and visited our first ever Wegmans.  It lived up to the hype, Wes and Amber Thompson!  We went in for zucchini and came out with enough groceries for five meals and the biggest pizza we had ever seen. 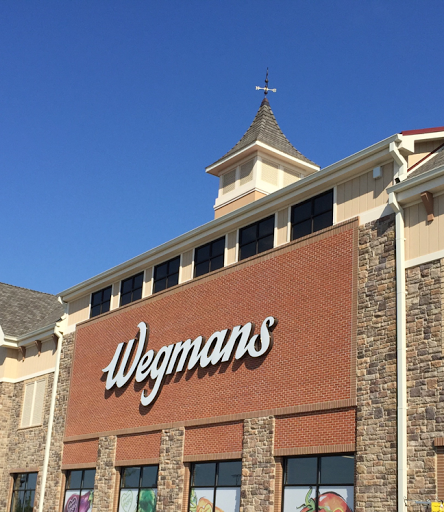 Our our third and final day in the DC area, we headed out to George Washington's Mount Vernon,

We were late for our tour of the famous house when these two elderly ladies traveling in this massive RV together were stuck in the middle of the campground roadway. Driver lady simply did not know how to back up her rig.  Passenger lady, in her house dress, was adorable but was zero help. Even less helpful than April.

Sensing yet another opportunity to rescue damsels in distress Mark hopped out of the truck and gave the 81 year old woman a lesson on angles, steering wheel hand placement, and the proper use of rear view mirrors.

Another group of ladies saved from distress by Mark's manliness. 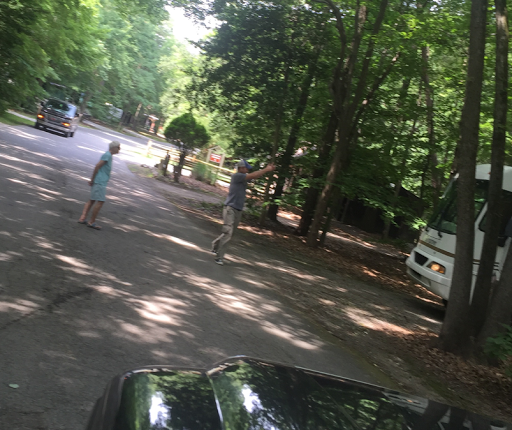 The very grateful ladies invited us to stay for boxed wine (it was 11:30am), but we had to pass because we had a date with Presidente Numero Uno at the historic Mount Vernon. 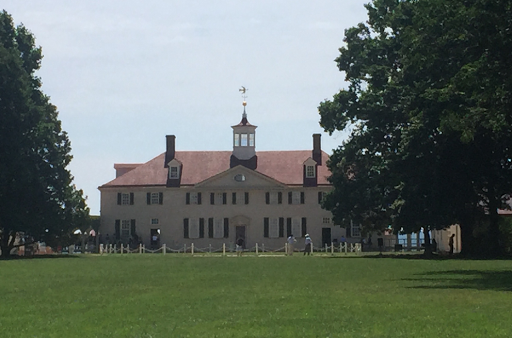 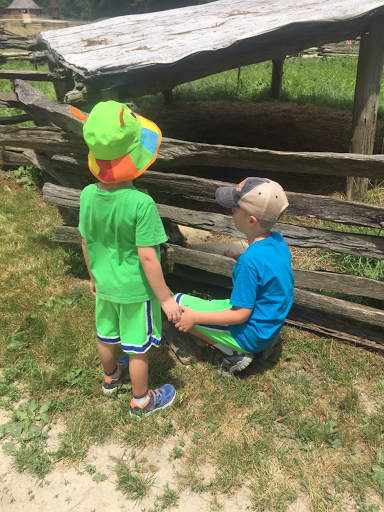 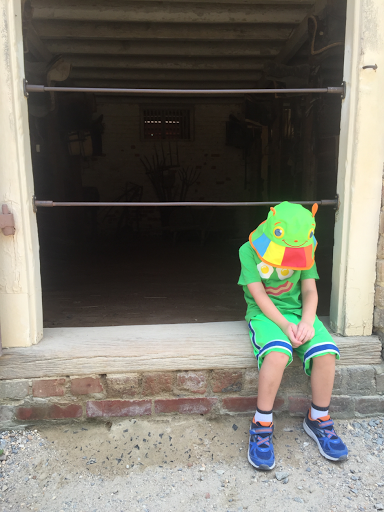 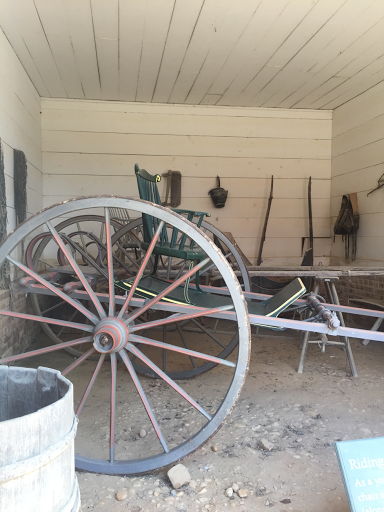 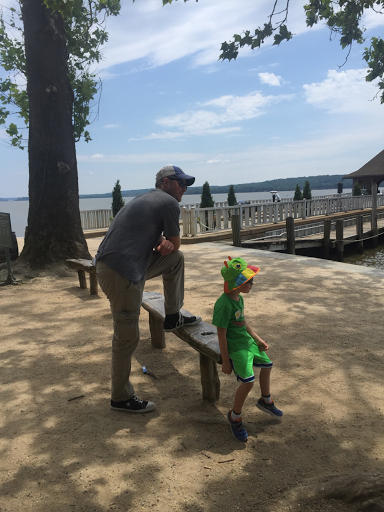 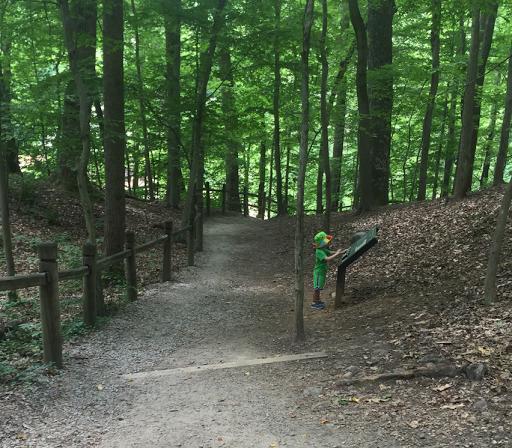 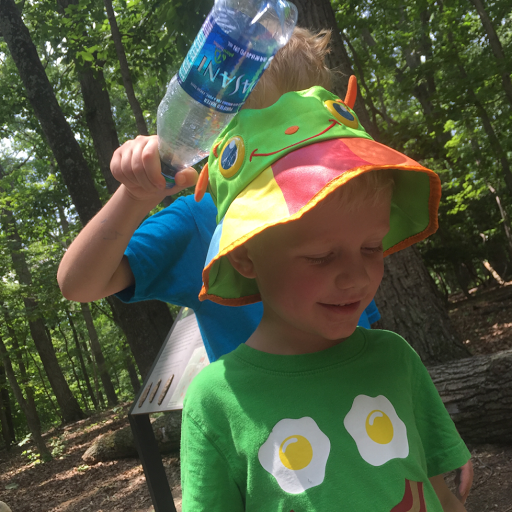 Having had our fill of history, we braved DC traffic one last time to meet up with the sweetest newly married couple you ever have seen, Caitlin and James.  Our kids were tired, hungry and grumpy... so we failed to get a group pic of the cutie pie couple. Oh, shucks... we'll just steal this one off their Facebook. 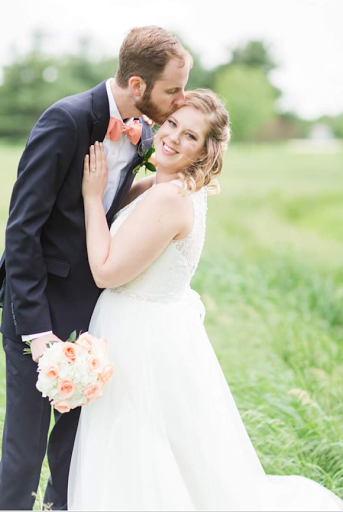 Aren't they swell? We love them.

Anywho, Chadwick's in Alexandria has delicious burgers, including an option to make your own burger creation.  Andrew made his own burger, The Meatinator, which included ham, swiss, ketchup, and bacon. Burger success. 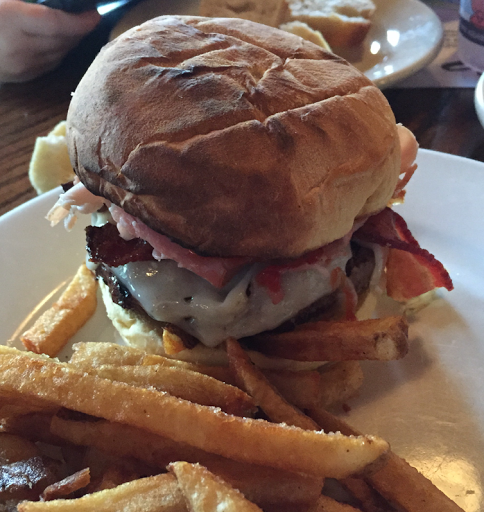 As we told our tales of DC adventures and mastering the Metro, James, a lifetime resident of the area, informed us that the DC metro is a death trap and a complete and total mess that should be avoided at all costs.  He cited instances of random fires, random beatings, random crashes... and random flooding leading to electrocution.

Turns out the Metro is just as dangerous as Zoe Barns would lead us to believe it is. House of Cards.

Done with city life, we're heading to the home of Mystic Pizza ... Mystic, Connecticut.
By The Royan Family at June 25, 2016