We left Breckenridge and headed for Denver to pick up our RV. A few frantic calls from Jack the Super-Mechanic and we learned that the parts we had been waiting a week for had finally come in - but they were the wrong parts. No worries - Jack had a plan - but "damn if (he) didn't need just one more day."

Jack: "I went next door and wouldn't you know I found just the part I needed and I asked the guy I said how in the heck did you have this specific part for a 2003 Winnebago? And he said to me, 'Jack, you ordered it from me 6 months ago and never picked it up.' So you know what we lost some time but we've got what we need so you and the kids head on over here and you can just camp at our shop tonight. We'll plug you right in.You can stay right here in the parking lot." 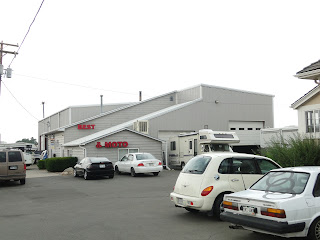 We booked a room at the Hilton Garden Inn.

With spare time on our hands, we headed to the Buffalo Bill Museum in Golden, Co. There were some cool rocks outside and we thought Andrew looked seriously cowboy on the rock outcropping on the top of Lookout Mountain. Going to be a mountain-climber like his Daddy for sure! 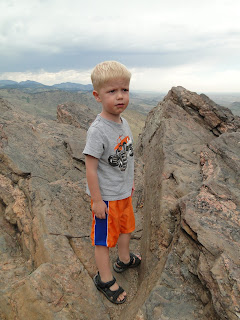 So back to Buffalo Bill... 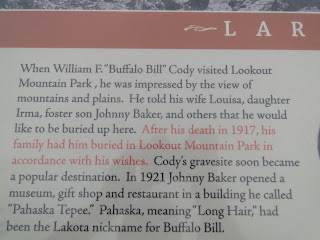 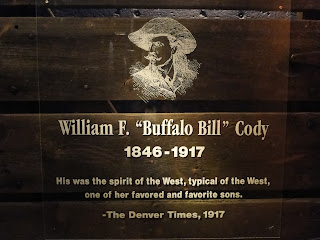 The museum was packed with Canadian tour groups - what is that all "aboot" - and we had to take our entertainment where we could find it. 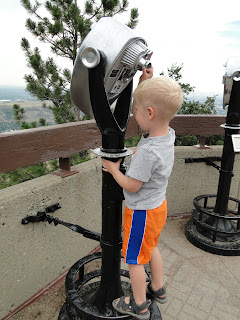 Apparently the Canucks have an obsession with taking pictures of adults in cowboy gear riding fake plastic horses which are meant for kids. Andrew waited 30 minutes to get on this horse. But he rode it like a real champ. 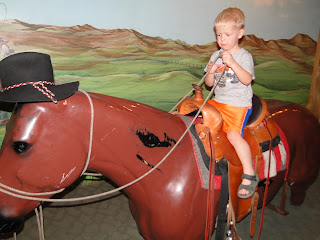 He had a little trouble getting on the calf, though. 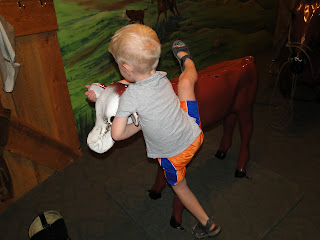 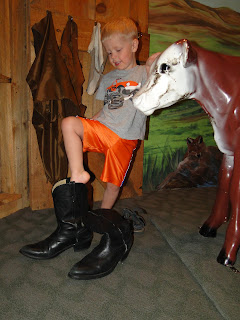 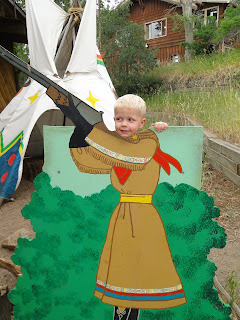 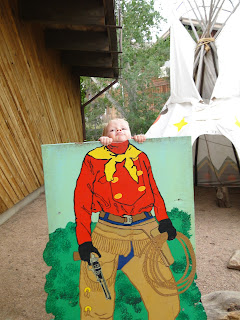 Thunder rolled overhead and Dad said we needed to hit the trail - apparently standing on top of a mountain during a thunderstorm is not smart? 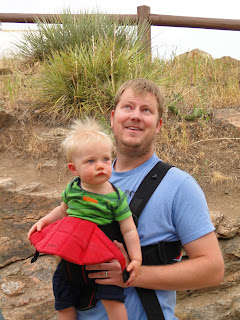 So we saddled up in our stylish and hip Crown Vic and continued our trip down to Denver. Goodbye Rockies! 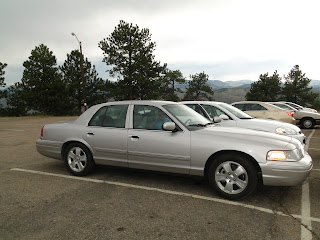 On our way to pick up our dear old friend RV we stopped at the highly recommended Kokoro. Kokoro is like a fast food version of a Japanese steakhouse.  Except instead of stuff flaming and flying on the table in front of you while you drink Sake for two hours it comes in a made-to-order bowl right in front of your face in about eight minutes.  They even have a drive-through!  So delicious! 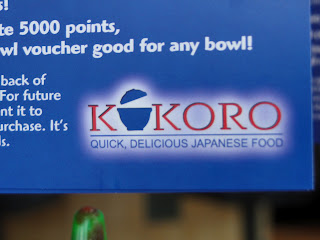 Max was a big fan. 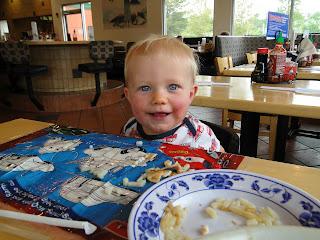 Andrew loves anything he can eat with chopsticks - and had no trouble putting away a giant order of shrimp tempura. 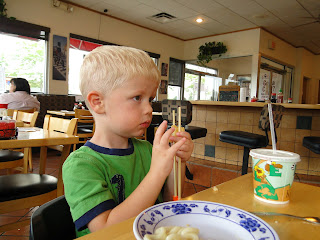 Bellies full, we headed over to reunite with the Royan Vehicle! She looked spectacular all fixed up and April dropped off Mark to pay the bill while she headed to the hotel with the boys:


Now you would think that checking in to a hotel with a puke-soaked kid would be enough. The mother instinct says "just hide the puke as much as you can until you get to the room and throw him in the bath.” That was the plan - until the door to our room opened to reveal a nice elderly woman who was already staying in that room.  Ugh - that's embarrassing - and yet another person who had to be exposed to the shrimp vomit.

Andrew was a champ and bounced right back from his car-sickness with a long bath and a bag of popcorn.  Dad finally arrived two hours later with the rig and we began the process of cleaning, laundering, unpacking, re-packing.  They fell in to bed exhausted at 1am - looking forward to getting on the road tomorrow!

We FINALLY headed out of Colorado with an empty RV in need of a serious Walmart stop! No worries, a GPS search informed us that we were a mere 250 miles from a major grocery store! Goody!

We stopped for lunch at a tiny Mexican Café with stellar Urbanspoon ratings called Jenny’s Mexican Food (in Kansas – who knew?).  It was delicious and the fine folks inside also lead us to a mini-grocery store that gave us enough rations to survive the following twelve hours. As we loaded up our bags an alarm started to sound and Mark ordered an RV evacuation! The whole team was sharp and exited the rig in record time.  The carbon monoxide detector was sounding and the fear that we could blow up any minute had us road-side and worried.  Of course Mark located the issue and fixed us right up – but a stern talking to was given by Mark to the rest of the family about on-the-road safety.  It put both the kids to sleep.

Two hundred miles later we found a Walmart and had ourselves a two-cart shopping spree! Upon checkout we heard thunder and exited to black skies and driving rain. We put our groceries away and got back on the interstate – apparently having totally forgotten anything we’d ever seen in The Wizard of Oz.  Minutes later the wrath of Kansas hell descended upon our tiny RV and hundreds of other interstate drivers in what the locals call “a thunderstorm.” Keep in mind we’ve lived through many thunderstorms and several hurricanes  – this was something else entirely.  Winds of over 6o mph , lightning, driving rain, hail, no visibility…. Yada yada yada.

The wind was blowing so hard that Mark’s hair was moving from wind through the window even though it was closed. The back windows of the RV had bubbles around the edges from water being blown through the seals.  It was intense.  We tried to pull off along with everyone else but cops would come along and make us get back on the road – as they don’t seem to favor a line of vehicles huddled under a single overpass. Finally we spotted an abandoned service station off the highway and we were able to pull under it! Hooray! We were still pretty sure we were going to blow over but took the opportunity to make dinner, bathe the kids, and tell some spooky bedtime stories about the “evil monster Kansas.”

Our fellow shelter-seekers had all sorts of storm issues – including the dudes Mark buddied up to that had a canoe blown off their car that was just hanging across the driver’s side and needed a good hoisting.  Fun times were had by all and hours later the “thunderstorm” passed and we got back on the road.

The boys were asleep and Mark steered the rig in the direction of a “nice, quiet state park that was just off the interstate.”  As we exited – the GPS re-set and said
“44 minutes to your destination.” Uh – yeah – it was wayyyyyy down a gravel road. In the dark. In the rain.  Never-the-less, we forged ahead and made camp around midnight just as the winds started up again.  April made plenty of comments to Mark about how smart it was of him to drag us even further from civilization in this weather that was hell-bent on sending our tiny camper flying through the air. Mark responded with plenty of suggestions that April should consider picking up a map and making a plan of her own if she wanted to voice her opinions. Their bickering was drown out by the howling of the wind and eventually the whole family fell asleep – vowing never again to visit this dreadful state.

Having braved “death”/Kansas weather, Mark decided things couldn’t get much worse and finally decided to do the unthinkable – let April drive.  The plan was to let her do some cruising as he napped in back. However, it turns out napping is hard to do when you feel the tell-tale rumble of the road shoulder as the RV sways and swerves its way down the interstate at speeds meant for Italian sports cars. Mark found it necessary to stay vigilant and gently remind April of the basics of motor vehicle operation. Either way – April crossed driving the rig off her bucket list. Mark took back over per Andrew’s request, “Daddy you drive, Mommy isn’t as good at it as you are.” He does sit up front and has his finger on the pulse of the whole experience. The family got out of Kansas and safely arrived at April’s parent’s house at the Lake of the Ozarks in Missouri!