Long, long ago a family with just one kid toured the country in their Winnebago and had a grand time. Upon the arrival of their second kid (August 24, 2012: Enter Max Royan), they decided their carefree ways were over and that dear old RV had to be put up for sale. It would make more sense to "fly" around the country like "normal" people seem to do.  Slowly but surely the plan formed to head out to the mountains this summer - on a plane and stay in a hotel. This decision was, of course, unilaterally April's idea. Months went by and plans developed.... but the RV gleam in Mark Royan's eye just could not...would not... be extinguished. So they agreed upon a compromise:

Mark's parents, recently retired, volunteered to drive RV out to Denver and the family could fly out and meet them. Having never flown with kids before, April made lists and packed everything in its place weeks in advance. Mark packed an hour before they left for the airport.  Running late, he informed April that he needed to shave. April told him to wait and do it at the hotel. Mark told April she was ruining his life.  The set in place a downward stress spiral that led to screaming kids in the check in line. April, in an effort to "cool her jets" decided to take the boys for a stroll around the terminal. She would return to find that Mark had checked a enormous bag, that no sane person would ever carry on to a plane.This bag, of course, contained an overwhelming supply of bottles, formula and toys. All of which, April intended to have with her in the comfort of the main cabin. April has her first meltdown of the trip. Super.

The check in chick took pity on an almost hysterical April and called in the fine folks at the Frontier baggage check to retrieve their bag and bring it to the gate.  Elated, April saw it when they walked up to the gate and immediately retrieved it from the 12-year-old gate agent.  April broke in to dance; the TSA broke the mood. The officer informed us that that bag and it's contents had not been screened and were not available for carry on.  April just kept taking bottles out and putting other stuff in from her purse. The officer suggested that this was not helping.

Either the agent assumed April was incapable of processing their conversation,  or he was married himself. He sighed, took the bag, and left.

The flight was packed. Prior to boarding, we had decided that the worst things that could happen were (not necessarily in the following order): screaming, vomit, pant shitting, and seat kicking. Prior to taxi: Andrew had kicked the seat of the man in front of him 5 times, Max was screaming hysterically, but only after spitting up half his bottle on April. As we were batting .750, the trip was off to a great start. Mark looked over at April, truly miserable, and mouthed "We are never doing this again." And then he was silent (Max was not). 2 hours later he spoke again. "You know what that RV was? Money. Well. Spent."


Needless to say - we are just not traveling-in-plane-with-kids people. But, we have other strengths; we think.  Ready to put that to the test, Mark rented us a giant cop-car Crown Victoria ("To hold all the luggage," he claims.) and we headed off to the equally as sweet Embassy Suites Downtown Denver to get our sleep on and dream of the next few days in Denver.

There Are No Whales In Denver

Sunday morning found us digging into the local activities. Andrew insisted that the first stop should be the Denver Aquarium.  He was specifically looking forward to seeing all the "whales" that Mark had told him would be there. 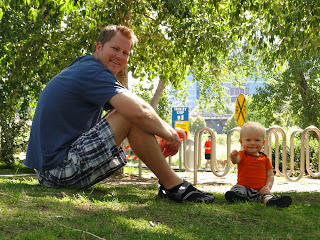 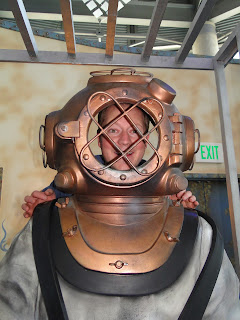 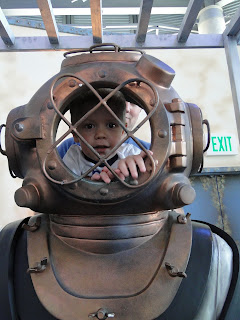 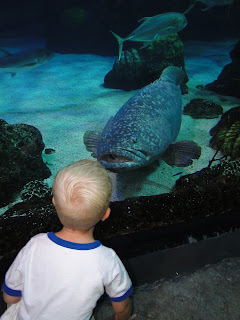 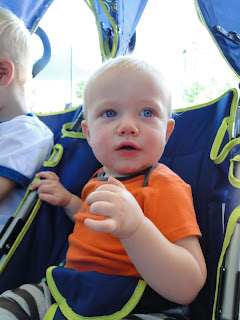 Needless to say, there weren't any whales - and we heard about it.

Our $43.80 entry fee afforded us exactly 45 minutes of whale-less aquarium fun. That might seem like a huge rip off until you consider that it produced two tuckered out babies who were happy to pass out in the stroller for a few hours as Mom and Dad chowed on some Mellow Mushroom pizza and  sampled the local Denver beer selection. 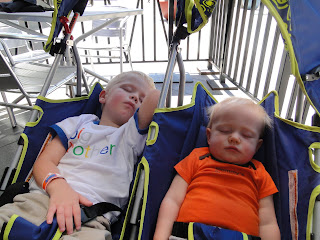 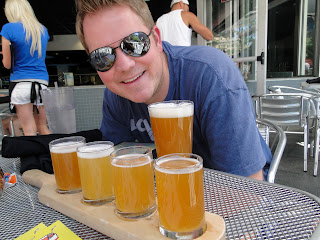 We spent the afternoon freezing our asses off in the hotel pool. Our kids were blue and shivering but Andrew, of course, insisted that he was "not cold mama, NOT COLD" and swam anyway.  We would have pulled the plug on the entire swimming outing had we not felt so guilty about the whole "whale situation."

At 6pm April suddenly remembered it was Father's Day.  Mind you, this was less than 24 hour after the Dollar Rental Car dude made sure to remind her to "take care of your baby daddy on Father's Day tomorrow!" Additionally, she had already mistakenly wished her own father a Happy Father's Day a week earlier - so her ignorance came as no surprise to the always unappreciated Mark. She eventually pulled it together and took him out to the first place they could get in to eat without a reservation - Maggiano's. As the meal finished up, April excused herself so that Mark could deal with 2 exhausted children and their bathroom needs as she scampered over to check out the sale at the neighboring boutique.  Happy Father's Day!

On Monday, we started our commitment to sample the plethora of Diners, Drive-Ins, and Dives locations in Denver. First order of business was to install the Flavor Town app and map out our attack. Breakfast found us enjoying this delicious Snickers Latte and giant breakfast burrito at Sam's No. 3. Andrew turned his nose up at our adventurous ordering and got himself a morning grilled cheese... with smiley fries. 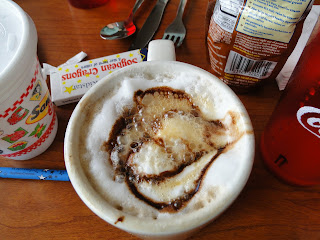 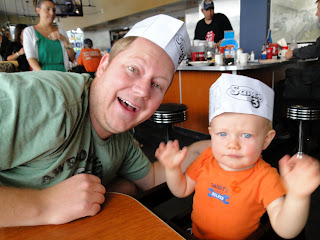 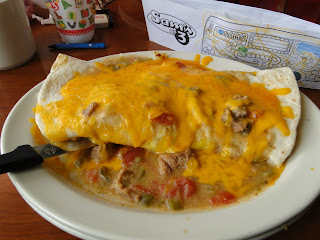 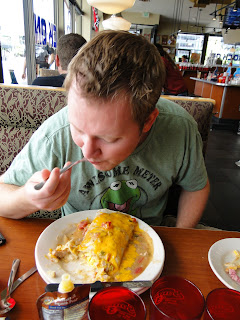 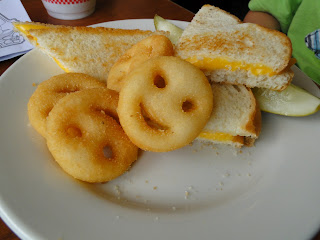 Fueled up, we ventured out to area attractions. Today we took on the much more reasonably priced Denver Museum of Science. This is a great museum, and very kid friendly. Both Andrew and Max thoroughly enjoyed it. 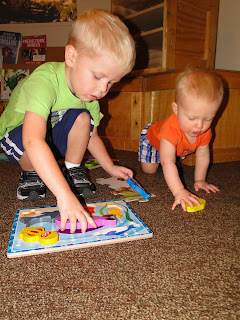 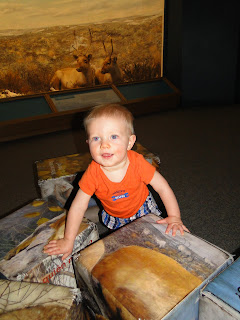 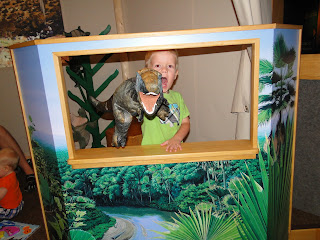 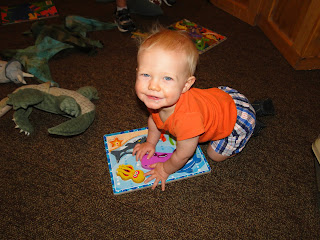 Somebody, somehow captured the interaction between Mark and April on the plane ride out to Denver: 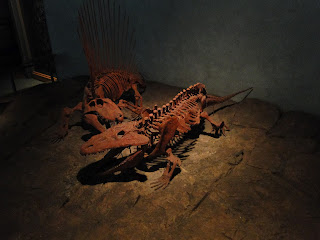 All that museum walking got us hungry. On to "Triple D" stop numero dos... Steuben's. This place was incredible. 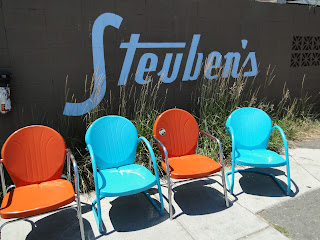 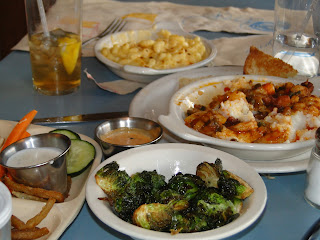 We won't bore you with pics of all their delicious food - but let's just say this was not the only time we visited this place this week.  As Andrew would say "There's a party in my tummy. So yummy. So yummy."

Tuesday morning we awoke (late) for breakfast at Snooze. Seriously, strawberry cheesecake pancakes. Simply put: Wow. Mark's cuban sandwich breakfast thing was equally as thought provoking. Max took this opportunity to firmly let us know that he was done with jar baby food and is ready for the big leagues. Mama and Dada are so proud. 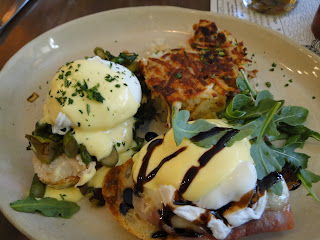 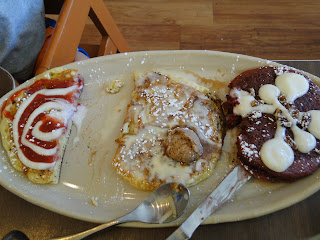 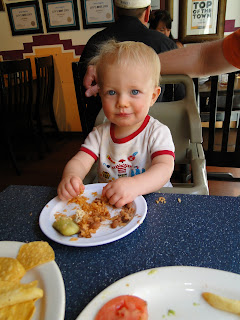 For lunch we sampled another Food Network fav, Jack-n-Grill.... 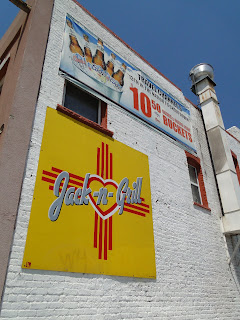 We did see a sight on Tuesday, none of us can remember what it was though. Isn't it really all about the food anyway?

Mark and his Dad took Wednesday to climb a nearby 14,000 foot mountain: Mount Bierstadt while April and Martha took the boys to the Denver Zoo. At the end of the day, Mark and April would compare notes to see who had the more tiring day. April thought she had Mark beat, I mean, its only one mountain - Colorado has a bunch of them.

But Mark had an ace in the hole. While it took him four and a half hours to go up and down Bierstadt, it took another 6 hours to deal with a pre-kickoff RV debacle.

If you are ever interested in exercising emergency management and problem solving, take a few summer trips with a motor home. The RV had some sort of rear wheel meltdown. This issue was discovered after Mark and Ray picked up the RV from the tire store where the RV had already been getting a blown out tire replaced. Tow trucks were called and the RV was hauled away on a flat bed trailer. What will happen next?
By Mark Royan at June 20, 2012