Day 23: Monday, June 20, 2011 and Day 24: Tuesday, June 21, 2011
Really Truly Otto
Morning found us cruising down the road toward Jackson, Mississippi through miles and miles of corn and what we think were cotton fields. Debate raged and fingers Googled until we spotted a sure source of knowledge: The Louisiana State Cotton Museum in Lake Providence, LA. Eager for answers, Mark and Andrew went in to check the place out. 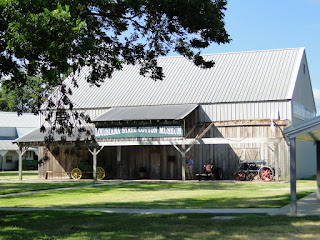 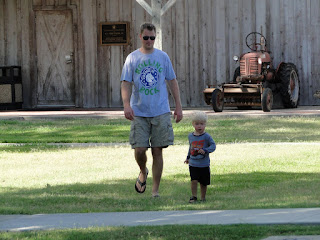 Seems the place is closed on Mondays so that the staff can recover from the intense cotton history demand from the weekend. Disappointed, and still not sure what everybody is growing in that part of the world (because it sure didn't look like cotton), the boys headed back to the RV with plans to do the next best thing: eat! 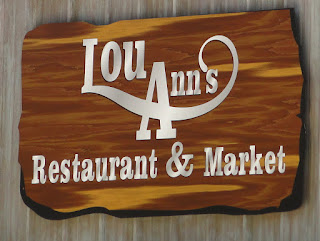 Starving and officially in the middle of nowhere, April announced that Mark was going to need to go against everything he believes in and pull into a McDonalds for lunch. Horrified, Mark announced that he'd "sooner eat a piece of cardboard that food had once been stored in because it would certainly have at least an inkling of nutritional value" He immediately pulled over to consult his phone for a more reasonable dining option. Lou Ann's Restaurant and Market in Tallulah, LA seemed to be an internet sensation - so we drove past the Golden Arches and into down-south, sweet tea heaven. As we arrived, Lou Ann (or someone that may or may not have been her) walked out of the kitchen with a huge pile of freshly fried Okra and put it down on a piping hot buffet of some of the most delicious southern cooking we had ever seen... and the Royans ate it all up. In addition, Lou Ann (or whoever she was) insisted that we try some of her sweet tea - which was like sticking a straw right into a Honey Bear plus caffeine. Yummy!
Post lunch, Andrew and April fell into a buffet coma while Mark pushed the pedal to the home of our favorite Mississippians, The Ottos. This year brought a new addition to the Otto fam, 3-week-old Baby Cassidy. 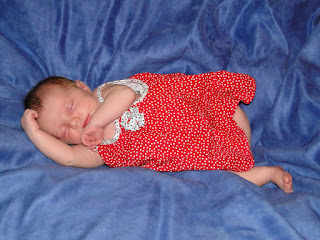 Andrew's best buddy, Big Brother Ever Otto, greeted us with smiles, waves, and comments about how "huge" our RV was. Then the boys got down to the business of playing. 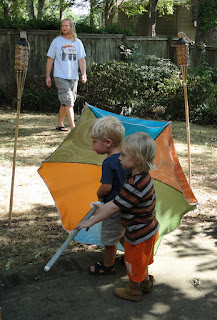 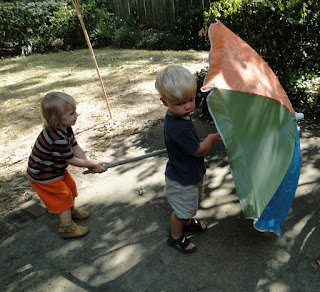 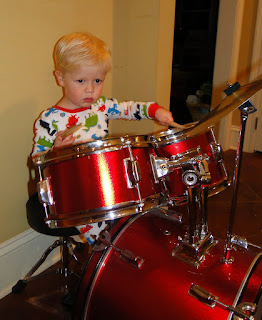 As night fell and more and more bottles of wine were opened, we put the boys in the tub so that Papa Casey and Mark could play with some of their own toys. 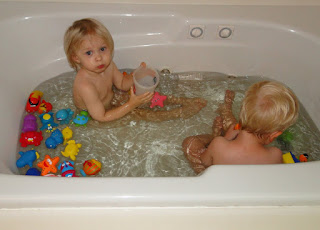 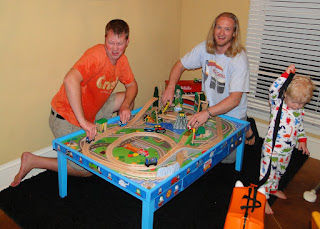 Rock star Casey not only cooks a mean steak, he also owns many, many instruments. 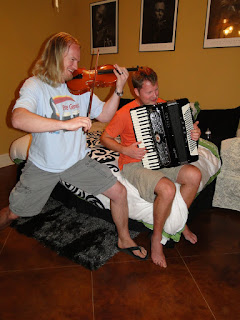 Early the next morning, we headed out to let the boys run around in a mall water fountain to further exhaust them before they had to part ways. Mama Otto took April shopping for some very expensive but very fabulous boots - which she did not buy but deeply wanted to. 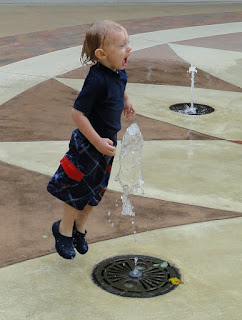 After eating an entire grilled cheese and part of Ever's peanut butter and jelly for lunch, Andrew was asleep the minute he hit the RV car seat. 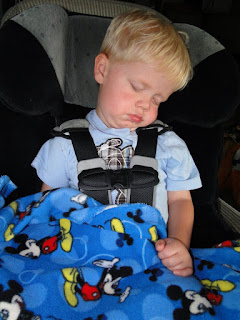 Thanks for a great time Ottos!
Baby snoozing, we headed south to Biloxi to camp along the Gulf of Mexico at the amenity-rich Cajun RV Park. Available luxury reads like offerings at the Hilton, and Mark took the opportunity to set up his grill and chat with the equally impressed neighbors for hours. Suddenly, a storm rolled in and sent grilling husbands everywhere scurrying to save their meat and their awnings simultaneously. The microwave had to finish off our chicken, but it was still delicious.
Andrew asleep, Mark and April sat watching White Collar on the 75 channel park cable and trying to remember why we would have left this great park after only one night last year? As we started to drift off to blissful sleep, the distinctive whistle of a freight train roared by... then another.... then another... This continued every 30 minutes until dawn as we longed to be back at the Otto house having lots and lots of fun and sleeping soundly in their homeowners association patrolled driveway.
By Mark Royan at June 21, 2011