After a delicious breakfast of bacon and eggs made by Dad on the camp stove, we took to cruising the island streets of Tybee and ended up at the impeccably maintained Fort Pulaski. Seems that good old Fort Pulaski was built to protect the port of Savannah. The project began in 1829 under the direction of Major General Babcock, and later Second Lieutenant Robert E. Lee. These dudes were pretty sure they were going to build the baddest-ass fort of all time. Walls were eleven feet thick and thought to be invincible to enemy attack.
Occupation of the fort got kicked around from one group to another for quite a while, but eventually the Civil War came along and some Confederate peeps decided to hang out there and make the place their own. Union Troops didn't like that idea so they blew the walls up with their bigger, badder cannons. Within 30 hours, Confederate Colonel Olmstead surrendered the fort. Robert E. Lee was bummed.
Now its a tourist trap that costs $5 a head to get in, except for us. We got in for free because the guy at the gate didn't have change for a twenty. In true Southern style he simply shrugged and said, "Today is your day!"
Mark still can't figure out how it was possible that he couldn't scrape together 10 bucks, there were at least 30 people already in the fort when we got there. 30 x $5 = $0? 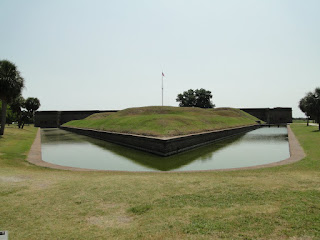 Andrew had other concerns - unsure of the tall “castles” and “mountains” surrounding him, Drew kept a tight hold on Dad. 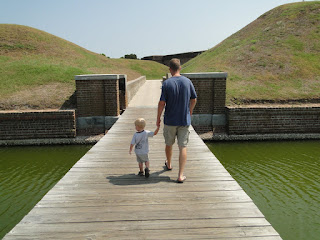 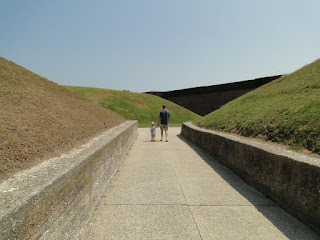 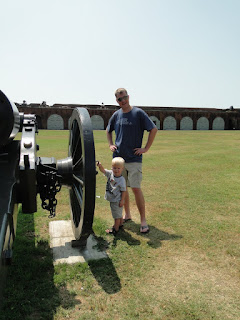 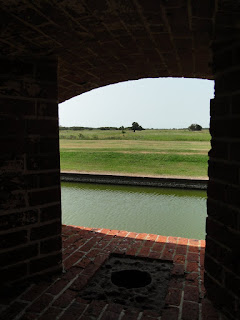 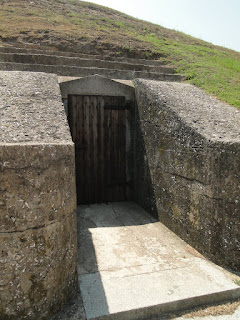 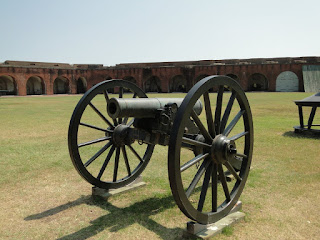 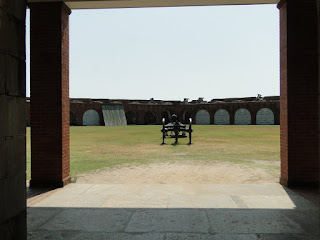 As the temperature pushed above 100 degrees yet again, we hopped back in the rig and headed over the South Carolina border toward Barnwell State Park for the night. Despite April’s impeccable navigational directions that the park was still 2 miles ahead, Mark slammed on his breaks suddenly and announced “we missed it!” He performed a sharp and very bumpy three-point-turn in the parking lot of a Baptist church advertising “Man Day” on its marquee. This sent a gallon jug of apple juice flying across the RV, but Mark was able to triumphantly proclaim that he’d seen the sign which April had so clearly missed... 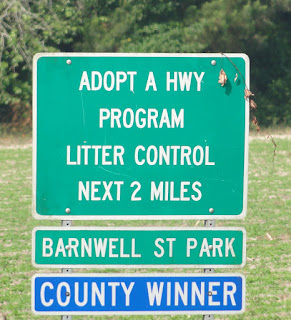 After realizing he had underestimated the Department of Transportation Mark shamefully turned the RV back around towards the actual park. He did make a point of complimenting the park manager on the exceptionally clean 2 miles of roadway that lead us to the park.

The park ranger hooked us up with a little slice of heaven deep in the woods for $16 a night. Mark and Andrew pushed their luck immediately by walking right up to the lake’s Alligator warning sign. Of course, as Mark the master of sign interpretation will tell you, “there aren't really any alligators in there.” 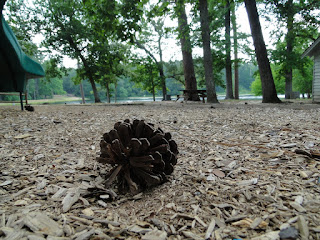 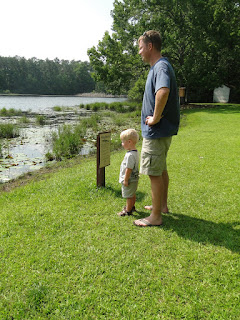 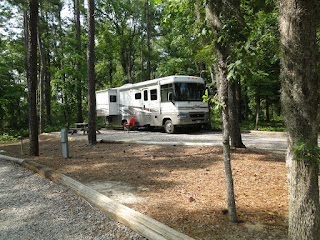 Eagle scout Mark was in his element – setting up chairs, putting out awnings, and all but ignoring the hungry cries of his wife and child. “Don’t you want to explore first?” Mark asked. Andrew looked him square in the eye and said “I’m hungry… It’s just the way I am.”

With that – the Smokey Joe was lit and our grill master took to teaching his son the secrets of the barbecue. The key to a great steak is to “listen to the meat, it will tell you when its ready”, we all learned… 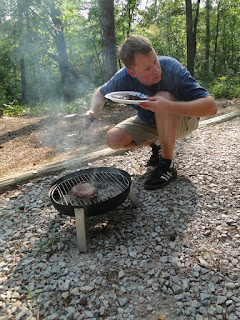 The other thing to remember is that the grill is hot. So don't go anywhere near it without Dad until you're 17. Good talk, Drew. 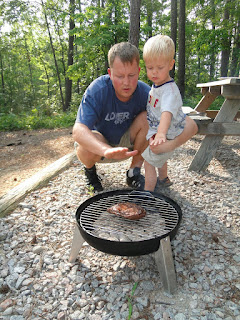 One massive meal later, Andrew played with his new Mickey Mouse Clubhouse RV set and watched Wheel of Fortune with Mom and Dad over the bunny ears. He is a maniac at the bonus round – especially with phrases.