Walking in Memphis (Drew Does Graceland)

An early morning bike ride around the Lake Charles Campground prepared us for another long day on the road through Arkansas, Tennessee, and Mississippi. Today, however, we were committed to checking out some local color. 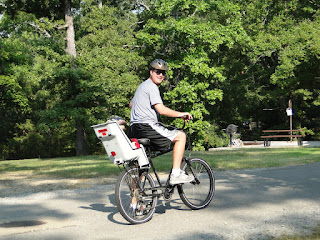 Enter UrbanSpoon.com - a culinary swiss army knife that lead us to two highly reviewed restaurants in the town of Trumann, Arkansas. We ventured into this small burgh not knowing which one we would choose until we discovered that one was closed on Sunday. So by default we ended up at a Mexican restaurant in the middle of rural Arkansas called Atzimba. 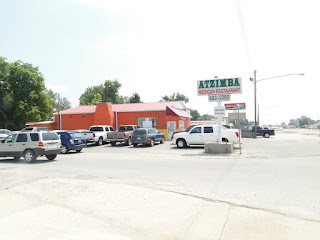 The place was packed with every family from Jonesboro to Memphis and the line was literally out the door for most of our stay. Who knew? It was delicious and Andrew was happy to be scarfing down guacamole and tacos once again.

Back in the RV, Mark sat down on April's couch that she lounges on while we drive and for the first time discovered the first class comfort she's enjoying while he's up front putting the pedal to the metal. He declared that he would stop everything right there and take a post-lunch nap, but after about thirty seconds the road (and the wife) called for him to get up and get back to the business of driving our rig to Memphis. Enter Walking in Memphis on the iPod....

Saw the ghost of Elvis On Union Avenue
Followed him up to the gates of Graceland
Then I watched him walk right through
Now security they did not see him
They just hovered 'round his tomb
But there's a pretty little thing
Waiting on the King
Down in the Jungle Room
We really hadn't planned to stop at Graceland... but how could we not? After all (useless knowledge straight ahead), Graceland has become the second most-visited private home in America with over 600,000 visitors a year; trumped only by the White House.

Like we've heard people say before, the actual house is really much smaller than you'd expect - and very heavy on the funky decor. Nevertheless, it's cozy... not the echoing palatial estate one has come to expect from Cribs. The grounds on the other hand are quite expansive... and these days are set smack dab in the middle of urban Memphis (also not what we were expecting). Online we read a review from a man who had "been planning the trip to Graceland for over three years." Really? Maybe there's more to it than we know but you pretty much get in line, buy your thirty dollar ticket, put on your headset, and follow the rest of the tourists. If you have a one-year-old you do all of that but also eventually give in somewhere near the Jungle Room and just let the kid chew on your headset. 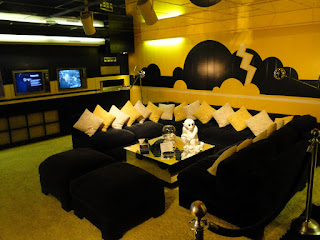 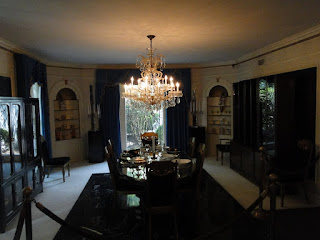 Of course Andrew wanted to crawl into every roped off area - specifically this one at the back entrance of the house. Mom had to hold him back with some extreme hugging. 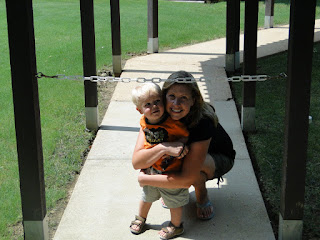 In the backyard Mark found the following "Mission Statement" by Vernon Presley prominently displayed on the door to his office: 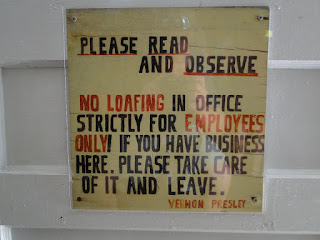 Most amazing to us was all the dedicated an continuing love from the fans. There were fresh flowers, gifts and little memorial trinkets displayed all over the grave area. People were visiting with Elvis haircuts and outfits and "remember when" stories. Believe it or not, the family in front of us was from Holland. They were in the States for a few weeks and were visiting New York City, Graceland, and Walt Disney World. It was amazing to us that those would be their three choices but we suppose that's what Italians must think when people visit Italy and only go to Rome. Either way, they did a great job getting Andrew to smile for this picture. 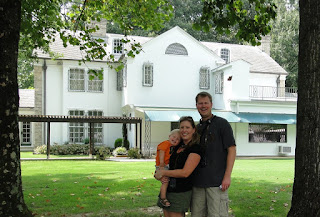 Tired from a long day we kept heading South and found ourselves camped at John W Kyle State Park in Sardis, Mississippi. We made dinner, watched Cars with Andrew, and went to bed early. Tomorrow we are off to Jackson, Mississippi to visit the Otto Family.
By Mark Royan at August 08, 2010