Wednesday begged us to partake in indoor activities in order to hide from the suffocating heat of Missouri. Since Jerry had to head back to Illinois for a few days, April and her Mom wasted no time in declaring it a shopping day and headed out early. Super Dad Mark and Andrew held down the fort at the house with a big day of playing, movie watching, and napping. Thankfully, the Grandparents had loaded Andrew up with all sorts of new movies and toys to entertain him (including this new train - which none of us can get back together quite right since we took it out of the box). 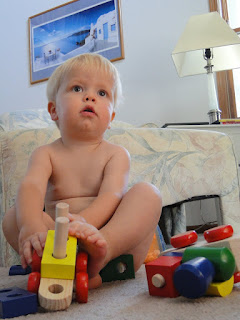 After a long day of shopping and an even longer day of babysitting for Mark, Sue offered to take Andrew for the night while we headed out for date night. Having an hour to kill between dinner and Inception, we played a lighting round of Mini Golf... which April calls "Perky Putt" since she's from Seneca.

After two consequtive hole-in-ones, Mark got a little too confident and busted out the video camera with hopes of capturing his greatness. Too bad April took that moment to dominate hole three and take the lead.

A late movie and lots of popcorn later, we navigated the tricky back roads of Missouri in the pitch black between lighting strikes and finally made it home safely. Another Missouri vacation day in the books!