Against the typically casual pace of the Lake, we rushed around like a couple of crazies this morning in an attempt to get out of Jer and Sue's house before their Realtor showed up to show their house to a potential buyer. As though HGTV or Ty Pennington were following us around, we turned the place from baby-shabby to chic in no time flat. Oh, and Mark fixed a lamp in the RV, because he's handy like that.

Off to Arkansas, we drove through some roller-coaster like back roads with an abundance of roadside boot shops. After about two hours Mark was convinced that he was also meant to have boots... but thank goodness we didn't see another shop after that. Too bad, because those would have been some seriously entertaining pictures...

Concurrently, Mark decided that if he could not have boots he would have barbecue. Maybe it's a cow craving? Either way, he found us a nice little barbecue shack and we were able to fill our bellies with baked potatoes stuffed with shredded pork, cheese, sour cream, barbecue sauce, and jalapeños. Our arteries hated us more and more with every bite. Of course we just told ourselves that despite what 2005 and The South Beach Diet might have had us believe, carbs really aren't the devil.

We grew tired and decided to stop in Powhatan, Arkansas, population 50. Their main strip provided a one-room "Ladies and Gentleman's Academy," an abundance of bait shops, and the path to Lake Charles State Park. We eagerly set up shop at this lovely campground. Andrew, having been couped up all day, decided to do some driving of his own. 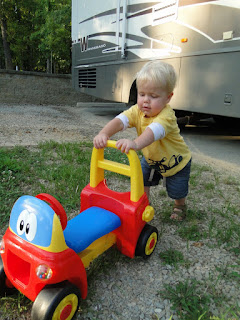 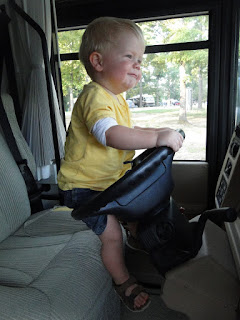 We don't have an actual bathtub in the RV, so we use this "tub" in our shower - and our little man thinks it's pretty funny. 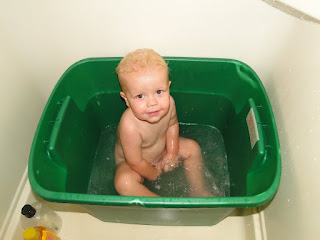 As April bathed baby, Mark busted out his camping hatchet and built us a fire with his bare hands (seriously) - it was lovely. 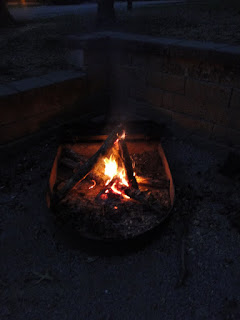 Baby asleep, we gleefully assembled ourselves and headed out to enjoy the beautiful campfire. We immediately noticed that the once busy campground had suddenly become silent without a fellow camper in site. Why was everyone indoors? Thirty seconds later we were descended upon by every mosquito in Arkansas. To say they were attempting to eat us alive seems like an understatement. April ran screaming inside, Mark doused the flames with water in a plastic cup and did the same. Covered in bites, we determined that we were better off curling up with the laptop and watching Funny People over microwave popcorn. With the air conditioner a blazin' - that's just what we did. Seems that after almost a month on the road, luxury camping is still more our style.
By Mark Royan at August 07, 2010