The Quickest Way to ALMOST Ruin a Vacation...

The Quickest Way to ALMOST Ruin a Vacation...

The first piece of advice we “seasoned travelers” can now give to other parents is to visit other people with kids as often as possible. Their houses are baby-proofed and new toys to dazzle your toddler with are part of the deal. This morning Andrew continued to be enamored with everything Jake – as Mark slept in and April got to relax in the recliner and learn all sorts of tricks of the trade from Erin. First, is everyone aware that you can make pancakes and bacon in less than 30 seconds? And that your kid will use a fork if it has a picture of Mickey Mouse on it? Yes, we've been doing it all wrong. 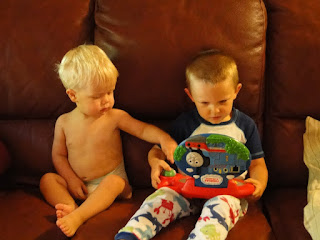 The day was going along swimmingly until we began packing up the RV and Mark couldn't find his wallet. Panic ensued and finger pointing began (rightly so), as the last time anyone had seen it had been in April's hands as she went into the grocery store last night. Seems that in all the excitement of buying Reen's birthday cake and balloons she had somehow left it in the shopping cart – and almost single handedly ruined vacation. The following conversation ensued:

Mark: “I am never handing my wallet over to anyone again... ever!”

April: “Well, you really shouldn't be doing that anyway.”

Mark: “Obviously I shouldn't be giving it to you. You see some silly decorations and pastries and completely forget that you're holding my identity in your hands.”

Fortunately, the good people of Indiana can be counted on to do the right thing and turned it in. Vacation saved... marriage saved... thanks Indiana! 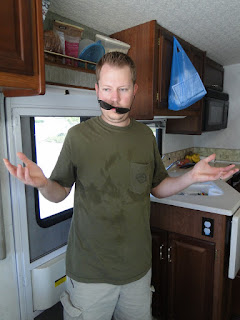 Mark after wallet was found... 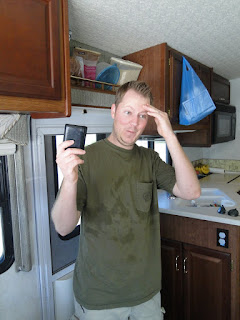 Wallet in hand and all cards and cash accounted for, we headed off for the three hour drive to Vandalia, Michigan. Vandalia is the home of Mark's Grandma, Mims, and Grandpa, Pips. Finally away from the Interstate, we enjoyed driving through miles and miles of cornfields and family farms. Enter here Mark's diatribe about how we should all be growing our own food and the idea that these amazing farmers are living the “simple life” (but did he ever watch that show – it didn't seem so easy for Paris Hilton?).

Along the way we stopped for lunch and Andrew re-discovered his love of Apple Butter. April re-discovered why she pays extra for Viva paper towels. 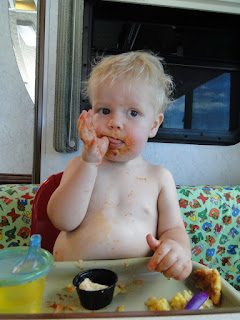 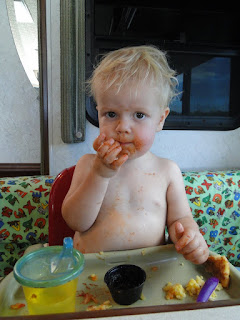 When finally at our destination, we were greeted with a huge pot of Mim's homemade chicken noodle soup and other delicious items. Here's to a few great days in Michigan!